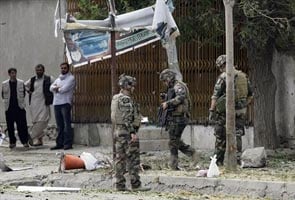 Kabul: A roadside bomb planted by Taliban insurgents killed 17 civilians -- mostly women and children -- on their way to a wedding party in western Afghanistan on Friday, officials said.

The victims were travelling in a minibus from one village to another for the celebrations when the explosion ripped through their vehicle in Farah province, provincial government spokesman Abdul Rahman Zhewandai told AFP.

"The latest toll we have shows that 17 civilians, the majority of them women and children, were killed and 14 more were wounded," said provincial police chief Aqa Noor Kintoz.

"Among the wounded are nine women, one child and four men," he said, blaming Taliban militants for planting the bomb.

Roadside bombs are the weapon of choice of the hardline Islamists fighting Afghan forces and some 100,000 NATO troops in an effort to topple the government of President Hamid Karzai.

While the Taliban says their targets are military, civilians using the same roads are frequently the victims.

In the first six months of 2012, a total of 1,145 Afghan civilians were killed and around 2,000 were wounded, mostly by roadside bombs, according to United Nations figures.

Women and children accounted for about 30 percent of this year's casualties.

Earlier this week a mother and her newborn baby were among six family members killed in a roadside bombing in eastern Afghanistan.

The victims were heading home from the hospital after the mother had given birth when the bomb planted by Taliban insurgents tore through their vehicle in eastern Khost province.

And little more than a week ago, a roadside bomb killed 10 civilians, including women and a child, heading for a wedding party in southern Afghanistan.
Comments
bomb