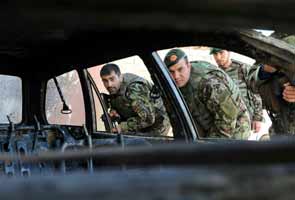 Mihtarlam: A bomb strapped to the back of a donkey killed one policeman and wounded three civilians in eastern Afghanistan on Friday, officials said.

The explosives were set off when the animal walked close to a police post in the volatile district of Alingar in Laghman province early in the morning, provincial spokesman Sarhadi Zwak told AFP.

"The bomb on the back of the donkey was remotely detonated, one policeman was martyred and three civilians wounded," he said.

The officials blamed the attack on Taliban militants who have been waging an insurgency against the western-backed Kabul government since they were overthrown in a US-led invasion in late 2001.

Although donkey bombs are rare in Afghanistan, they are occasionally used by insurgents to get close to targets.

Last August, a bomb strapped to a donkey blew up in the central province of Ghor killing a local police chief and injuring three others.

Promoted
Listen to the latest songs, only on JioSaavn.com
Friday's attack came two days after nine Taliban gunmen and suicide attackers stormed a court complex in the western province of Farah, killing at least 46 people and wounding up to 100 more.