Bob Woodward describes a coalition of like-minded aides and cabinet secretaries plotting to prevent the impulsive US president from destroying the world trade system, undermining US national security and sparking military conflicts. 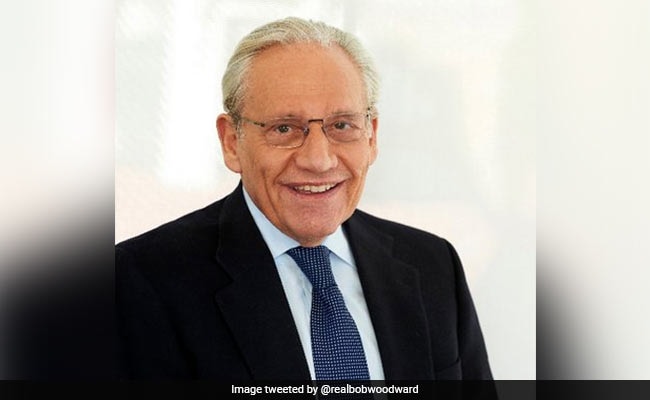 President Donald Trump's White House is mired in a perpetual "nervous breakdown" with staff constantly seeking to control a leader whose anger and paranoia can paralyze operations for days, according to a new book by Bob Woodward.

The veteran White House chronicler describes a coalition of like-minded aides and cabinet secretaries plotting to prevent the impulsive US president from destroying the world trade system, undermining US national security and sparking military conflicts.

Defense Secretary James Mattis and former economic advisor Gary Cohn are among aides actively circumventing Trump's orders and even stealing documents off his desk, according to Woodward.

Team Trump was quick to hit back at the accusations, saying Woodward's account amounted to "nothing more than fabricated stories, many by former disgruntled employees, told to make the president look bad."

"While it is not always pretty, and rare that the press actually covers it, President Trump has broken through the bureaucratic process to deliver unprecedented successes for the American people. Sometimes it is unconventional, but he always gets results," spokeswoman Sarah Sanders added.

Woodward describes Trump's White House as having undergone "no less than an administrative coup d'etat," according to The Washington Post and CNN, both of which obtained advance copies of the book on Tuesday.

"A third of my job was trying to react to some of the really dangerous ideas that he had and try to give him reasons to believe that maybe they weren't such good ideas," former Trump staff secretary Rob Porter said.

Woodward's much-awaited book, "Fear: Trump in the White House," paints a much more chaotic picture of the White House and Trump's capricious behavior than any previous accounts, according to the Post and CNN.

He describes Trump regularly insulting key members of his own team, branding Attorney General Jeff Sessions "mentally retarded" and a "dumb Southerner," and former chief of staff Reince Priebus "like a little rat."

Trump is quoted as telling his hand-picked 80-year-old secretary of commerce, Wilbur Ross, "I don't trust you... You're past your prime."

The aides and cabinet members respond, privately, with equal disdain.

Current Chief of Staff John Kelly told colleagues Trump is "unhinged" and "an idiot," according to Woodward.

"It's pointless to try to convince him of anything. He's gone off the rails. We're in Crazytown," Kelly is quoted as saying.

But in a White House statement, Kelly denied making the comments.

"The idea I ever called the president an idiot is not true," he said.

"We have an incredibly candid and strong relationship. He always knows where I stand, and he and I both know this story is total BS."

And, after having had to explain to Trump in January that the US must keep forces in South Korea "to prevent World War III," Mattis told colleagues that Trump had the understanding of "a fifth- or sixth-grader" -- a 10- or 11-year-old child.

The book by Woodward, slated for official release on September 11, poses a hefty new challenge to a White House already besieged by multiple investigations and a looming election that could damage Trump's Republicans.

Among Washington writers, Woodward, who together with Carl Bernstein brought down president Richard Nixon with their 1970s Watergate expose in the Post, is most respected for his reporting on the modern presidency.

He has published powerful, insightful and often embarrassing books on eight presidents, including George W. Bush and Barack Obama, based on extensive access to many White House insiders.

While he does not name his sources, Woodward says he spoke with many people currently or formerly working for Trump as he conducted research for "Fear," discussing not just the president's personality but also major policy debates regarding North Korea and Afghanistan.

"Fear" is flecked with accounts of White House officials working to prevent Trump's anger and paranoia from being translated into policy.

Cohn, chief White House economic advisor until April, went so far as to steal an order from Trump's desk that, if the president had signed it, would have canceled the US-South Korea trade agreement and thus deeply damaged security ties, according to Woodward.

Earlier, Porter was said to have conspired with Cohn to remove an letter that Trump ordered Porter to draft that would have withdrawn the US from the North American Free Trade Agreement.

Mattis acted on his own to avoid Trump's demand to assassinate Bashar al-Assad after the Syrian leader attacked civilians with chemical weapons in April 2017.

Mattis agreed to take action, but after he hung up, he ordered "more measured" steps against Syria, a punitive air strike.

"It felt like we were walking along the edge of the cliff perpetually," Porter is quoted as saying.