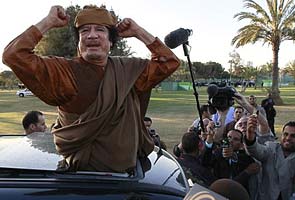 Several bright flashes and loud explosions split the night at around 2:30 a.m. local time (00:30 GMT) while jets could be heard circling overhead.

NATO bombing raids and other military operations began this spring to protect civilians rebelling against the Libyan regime, but Gaddafi has so far managed to keep his grip on the capital, Tripoli.

The plant, located six miles (10 kilometers) south of the strategic oil installation, builds the huge pipes that carry water from underground aquifers deep in the south to the coast as part of the Great Man Made River irrigation project.

"Major parts of the plant have been damaged," said Abdel-Hakim el-Shwehdy, head of the company running the project. "There could be a major setback for the future projects."

At least 70 percent of Libyans survive on the water carried through the pipes to the coast in the project, according to government figures.

Reacting to the NATO raids demonstrators chanted and waved pictures of Gaddafi, dwarfed by a giant portrait of their leader in military dress, in the Tripoli's Green Square on Friday.

Pro government supporters said there were thousands of Gaddafi supporters in the Green Square but television pictures told a different story with the square far from capacity.

One woman Najlaa said the crowd were there to show the world that Libyans remained loyal and continued to support their leader, in the face of the sustained NATO air raids.

"All the Libyan people are gathering here to show the whole world, Europe, America and NATO that the Libyans are strong. Libyans are fighters, Libyans love (Colonel Moammar) Gaddafi."

The demonstration comes at a time when Libyan rebel spokesman Ali al-Issawi - has called for Gaddafi to stand trial at the international war crimes tribunal, despite growing Western consensus that the longtime dictator be allowed to stay in his homeland if he relinquishes power.

"The first principle is that Gaddafi should step down," al-Issawi said after a meeting with Italian Foreign Minister Franco Frattini in Rome. "After that you can talk about the details."

Asked how the so-called "leave Gaddafi in Libya option" squares with the warrant for his arrest by the International Criminal Court, al-Issawi told reporters that there was "no contradiction between the two."

Promoted
Listen to the latest songs, only on JioSaavn.com
"We would like Gadsafi to be taken to the ICC," al-Issawi said, referring to the Hague-based tribunal.

Washington, Paris and Rome have all proclaimed their acceptance of the idea that Gaddafi remain in Libya, on the condition that he give up power and the Libyan people grant their approval.