At Prime Minister's Questions, a parliamentary session when lawmakers get to quiz the British leader every Wednesday, Boris Johnson used some choice language to attack Labour and try to rally his Conservatives after a bruising night on Tuesday. 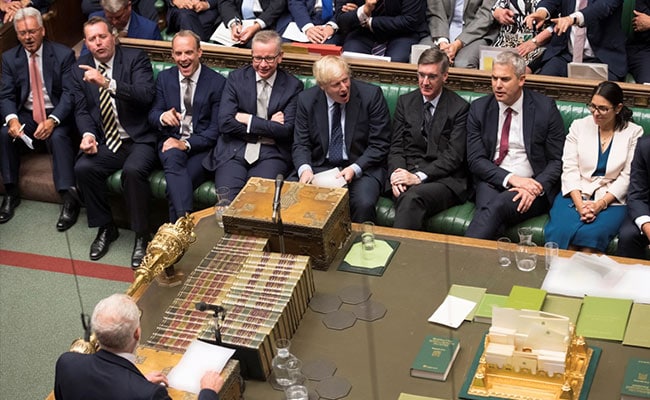 At Prime Minister's Questions, a parliamentary session when lawmakers get to quiz the British leader every Wednesday, Johnson used some choice language to attack Labour and try to rally his Conservatives after a bruising night on Tuesday.

After losing a vote on his Brexit plans late on Tuesday, Johnson was keen to get on the front foot by accusing Corbyn of supporting a policy of "dither and delay" over Brexit but also of running scared of his call for an early election on October 15.

"There's only one chlorinated chicken that I can see ... and he's on that bench," Johnson said, pointing at Corbyn who has criticised the British leader's enthusiasm for a trade deal with the United States over, among other things, concerns over food standards.

He also appeared to shout at Corbyn that he was a "great big girl's blouse" - a coward - over his decision to back an election only when a no-deal Brexit was off the agenda.

Johnson, whose government has lost its majority after he axed 21 lawmakers from his party, wants to hold a snap election to shake up parliament, which is deeply divided over Brexit and rejected his predecessor Theresa May's exit deal with the EU three times.

Corbyn has also repeatedly said he wants an election to ditch Johnson's "phoney, populist cabal" but first seeks to see a move to stop the prime minister from leading Britain out of the European Union without a deal embedded in legislation.