"Being Strong On China Because I Have To Be": Donald Trump On Tariff War

Trump has threatened tariffs on all Chinese imports, a move that would sharply escalate trade war with Beijing over Trump's demands for major changes in economic, trade and technology policy. 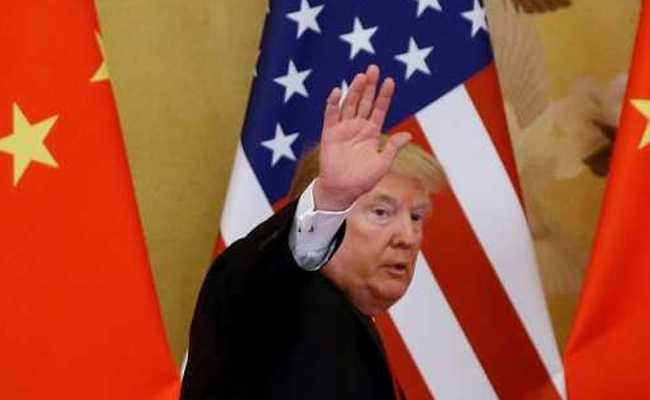 Trump has already imposed 25 percent tariffs on $50 billion worth of Chinese goods.

US President Donald Trump warned on Friday he was ready to slap tariffs on virtually all Chinese imports into the United States, threatening duties on another $267 billion of goods on top of $200 billion in imports primed for levies in coming days.

The moves would sharply escalate Trump's trade war with Beijing over his demands for major changes in economic, trade and technology policy. China has threatened retaliation, which could include action against U.S. companies operating there.

Hours after a public comment period closed on his $200 billion China tariff list, Trump told reporters aboard Air Force One that he was "being strong on China because I have to be."

"The $200 billion we are talking about could take place very soon depending on what happens with them. To a certain extent it's going to be up to China," Trump said. "And I hate to say this, but behind that is another $267 billion ready to go on short notice if I want. That totally changes the equation."

Stock prices slipped after his comments, with the S&P 500 off 0.2 percent, while China's off-shore trade yuan currency fell against the dollar.

The $200 billion list, which includes some consumer products such as cameras and recording devices, luggage, handbags, tires and vacuum cleaners, would be subject to tariffs of 10 percent to 25 percent.

Cell phones, the biggest U.S. import from China, have so far been spared, but would be engulfed if Trump activates the $267 billion tariff list.

Trump's threatened tariffs, now totalling $517 billion in Chinese goods, would exceed the $505 billion in goods imported from China last year. But 2018 imports from China through July were up nearly 9 percent over the same period of 2017, according to U.S. Census Bureau data.

Most comments were from companies seeking to remove products from the tariff list, arguing there were few, if any alternative sources and the duties would cause financial hardship. Comparatively few applauded the tariffs.

Major technology company Apple Inc said a "wide range" of its products would be hit by the tariffs, but not its iPhone. It said in a late submission that its AirPods headphones, some of Apple's Beats headphones, and its new HomePod smart speaker would face levies, causing its shares to slip in late trading.

"Our concern with these tariffs is that the U.S. will be hardest hit, and that will result in lower U.S. growth and competitiveness and higher prices for U.S. consumers," Apple said in the letter.

Retailers had successfully kept high-profile consumer electronics such as cell phones and television sets off of previous tariff lists. But David French, top lobbyist for the National Retail Federation, whose members include Amazon.com , BJ's Wholesale Club and Macy's, said nearly every consumer good could be affected if Trump follows through on all threatened tariffs.

"The Chinese aren't paying these tariffs, American families are going to pay these tariffs. These are taxes and they're going to find their way into the pocket book of folks around the country," French said.

Kudlow, who heads the National Economic Council, told CNBC the administration was still talking with China about trade issues but so far China had not met U.S. requests.

"We are still talking with China on a number of issues ... Those talks will continue to go on. We want lower (trade) barriers across the board," Kudlow said.

"Those have been our asks for many months and so far those asks have not been satisfied," he said. "However, hope springs eternal."