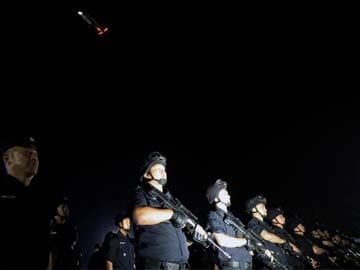 Representational Image: This picture taken on May 8, 2014 shows a police helicopter flying over as security personnel took part in a counter-terrorism drill in Beijing.

Beijing: Beijing launched armed police patrols on Monday to handle violent incidents in the capital city, authorities said, three weeks ahead of the 25th anniversary of the Tiananmen crackdown and after a series of attacks on civilians.

The armed division, which has 150 vehicles, aims to "strike on terrorist and violent crimes in a rapid and effective way", the Beijing Municipal Public Security Bureau (PSB) said on its verified account on Weibo, a Chinese equivalent of Twitter.

The patrols were being deployed in the face of "the current severe and complicated situation of anti-terrorism," it said.

The Chinese government is on alert after a series of dramatic attacks it blames on militants from far western Xinjiang, home to the mainly Muslim Uighur minority.

A fiery vehicle crash in Beijing's Tiananmen Square -- the symbolic heart of the Chinese state -- last October was followed by a horrific knife assault in March at a railway station in the southern city of Kunming, which left 29 dead and 143 wounded.

The Beijing PSB said that each patrol vehicle will have an armed team of at least two police officers and one auxiliary on every shift, who will arrive on the scene within three minutes of a report.

They will park at main roads, crowded venues and unspecified "key areas" -- possibly a reference to politically sensitive sites such as Tiananmen Square -- and set up checkpoints, it said, adding: "They will respond immediately whenever an emergency takes place."

Promoted
Listen to the latest songs, only on JioSaavn.com
The announcement came three weeks ahead of the sensitive June 4 anniversary of the brutal suppression of huge anti-government protests in Tiananmen Square in 1989, when hundreds -- by some estimates, thousands -- were killed.