Last weekend's Neom Beach Soccer Cup was one of the first public events to be held on the site of the $500 billion futuristic city Saudi Arabia plans to build from scratch on the Red Sea. 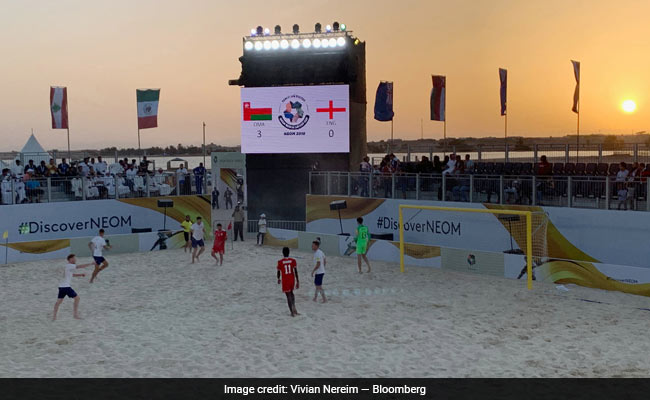 The tournament on the sandy shores of northern Saudi Arabia was meant to be about sports, but for many of the spectators the real draw was the venue.

Last weekend's Neom Beach Soccer Cup was one of the first public events to be held on the site of the $500 billion futuristic city Saudi Arabia plans to build from scratch on the Red Sea.

So far, Neom -- a 26,500-square-kilometer (10,232-square-mile) region in northwest Saudi Arabia -- is mostly just an idea and a dot on Google Maps. Many skeptics have dismissed the vision of a city that will host more robots than people as unlikely to materialize, noting that foreign investors have yet to commit to the ambitious plan. Some were unnerved by the murder of government critic Jamal Khashoggi by Saudi agents in Istanbul last year.

But the tournament offered a chance to promote a different image of the conservative Islamic kingdom and display the planners' vision for the project.

"These kinds of events are very important for us to showcase the beauty of Neom and the potential that Neom has in the sports sector," said Lojain Alharbi, a 25-year-old sports business analyst for Neom. "We want Neom to be a launchpad for extreme adventure sports, a healthy living hub, a global capital for elite sports."

Teams from countries including the U.K., China and the United Arab Emirates competed in beach soccer, beach tennis, beach rugby and wakeboarding. In April, Neom played host to an extreme sports event.

Foreign women in jean shorts watched the matches alongside Saudi men in traditional white robes as rock music pounded in the background. In an outdoor lounge decked out with Instagram-friendly wooden swings, a food truck served up wagyu beef sliders and sweet potato fries. It was a stark contrast to the surrounding region, where public spaces are gender-segregated and most women cover themselves in black from head to toe.

"I don't feel like I'm in Saudi Arabia," said Fahd al-Shammari, 31, an employee at the Riyadh municipality who flew in from the capital for the event. "I feel like I'm outside the kingdom."

The crowd of several hundred spectators, who entered for free, was a mixture of Neom employees, Saudi media and curious local residents.

"We wanted to see what it was," said Hajer, a 28-year-old teacher from the nearby city of Tabuk who asked to withhold her surname to speak freely. She said she had no issue with Neom having a more open social atmosphere so long as it respected the bounds of Islam.

"There didn't used to be much in this area," she said. "Now we see people, events - this is nice, it serves us Saudis in a big way."