"Hey Batman": Passengers Of US Airline Get An In-Flight Surprise

Videos posted to social media showed passengers screaming and laughing as what appeared to be a bat flew around a Spirit Airlines plane en route to New Jersey. 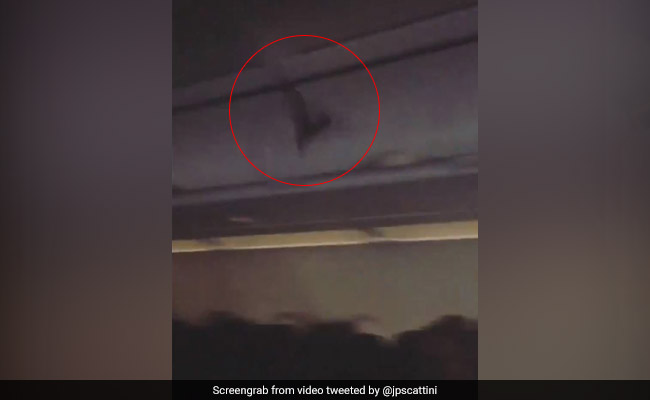 It wasn't clear how long the flying mammal was free to roam about the cabin.

Few things come without an extra fee on Spirit Airlines, but some passengers got a free shot of adrenaline earlier this week when a winged creature flew up and down the cabin.

Videos posted to social media showed passengers on a flight to Newark, New Jersey, screaming, laughing, offering suggestions and yelling "It's the Batmobile!" as what appeared to be a befuddled bat flew up and down the cabin Wednesday morning.

USA Today reported that the flight left Charlotte, North Carolina, at 6 a.m. Wednesday headed for Newark. Passenger Peter Scattini wrote on Twitter that the bat emerged "WHILE WE WERE 30 MINUTES INTO OUR FLIGHT" (the capital letters were his). He added that he had no idea where it came from.

One video includes audio of people riffing as the critter flies to the front, back and then front of the plane. At one end, a woman watches from the partially open door of a bathroom. Remarkably, one passenger appears to sleep through it all.

"It's the Batmobile!" a woman replies, before adding "Hey Batman!"

On another video, a woman can be heard saying that she had spotted the bat five minutes earlier. "I thought I was, like, hallucinating," she said.

me, twice a year: “i'll never fly spirit again.”
me, this morning, after deciding i'd rather save 12 dollars: pic.twitter.com/ASqk3bb89j

One man didn't have to wonder if what he saw was real: he said he literally got hit in the head. In a response, Spirit asked for his reservation information so it could investigate, assuring him: "We want to raise your Spirit-s!"

It wasn't clear how long the flying mammal was free to roam about the cabin, but Scattini said someone finally found a way to contain it.

"Eventually someone trapped it between a book & a cup and then locked it in one of the restrooms for the remainder of the trip," he wrote.

On its social media account, the airline replied to Scattini on Thursday: "We certainly want to address this for you." Public relations representatives for the airline did not respond to a phone call or emails Friday afternoon. On Twitter, Scattini wrote that the carrier offered reimbursement for the flight and a $50 voucher.