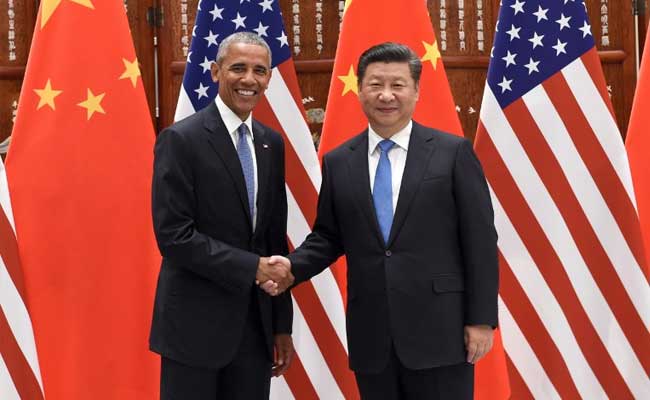 Barack Obama said the US has been firm with China over its behaviour in South China Sea region.

Washington: Warning China of "consequences" due to its aggressive behaviour, US President Barack Obama has asked the Communist nation to restrain itself from worrying its neighbours in the disputed South China Sea region.

"Part of what I've talked to communicate to President Xi (Jinping) is that the United States arrives at its power, in part, by restraining itself," US President Obama said.

"You know, when we bind ourselves to a bunch of international norms and rules, it's not because we have to, it's because we recognise that, over the long-term, building a strong international order is in our interests. And, I think, over the long-term, it will be in China's interests, as well," he told CNN in an interview recorded before he left for China to attend the G20 Summit.

"So where we see them violating international rules and norms, as we have seen in some cases in the South China Sea or in some of their behaviour when it comes to economic policy, we've been very firm. And we've indicated to them that there will be consequences," President Obama said.

What the US has tried to emphasise to China is that if it is working within international rules and international norms, then they should be partners, he asserted.

"There is no reason that China and the US cannot be friendly competitors on the commercial side and important partners when it comes to dealing with the many international problems that threaten the two countries," Mr Obama said.

President Obama noted China has been run during his lifetime by a Communist party that has been "much more anti-Western" in the past.

"We went through a period over the course of 20 years, in the '90s and on through maybe the onset of my presidency, where, because state-sponsored capitalism and an export-driven model was very successful, China was less interested in making waves," Mr Obama said.

"But, you know, you've got over a billion people, one of the largest economies now in the world. And so it's to be expected that they will want a bigger seat at the table when it comes to international affairs. And what we've said consistently is we welcome the peaceful rise of China, consistent with international norms. That's good for everybody. An impoverished and collapsing China would be dangerous for everybody," Mr Obama said.
Comments
South China SeaSouth China Sea DisputeBarack ObamaObama Warns ChinaUS-China RelationsChina G20 Summit