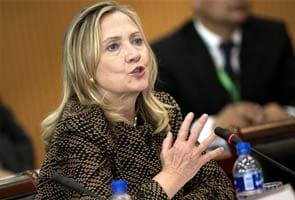 Phnom Penh: President Barack Obama is sending Secretary of State Hillary Rodham Clinton to the Middle East in hopes that she can help mediate an end to bloody conflict in the region.

A deputy White House national security adviser says Clinton will depart Tuesday from Cambodia, where she had accompanied Obama on a visit to Southeast Asia.

Clinton will begin her Mideast diplomacy by meeting with Israeli Prime Minister Benjamin Netanyahu in Jerusalem. She also will meet with Palestinian officials in Ramallah before heading to Cairo to meet with leaders in Egypt.

Israel has been firing rockets into the Gaza Strip in an attempt to end months of rocket fire out of the Hamas-ruled territory.

The U.S. says Israel has a right to defend itself.
Comments
Israel