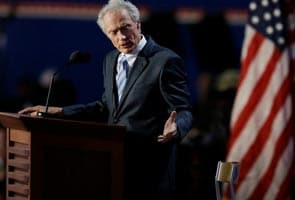 The "Dirty Harry" star -- whose talking-to-an-empty-chair routine stole the show at the Republican convention -- issued another endorsement for Mitt Romney last week, warning: "There is not much time left... our country is at stake."

But while his high-profile backing is no doubt welcomed by Republicans -- even if his August skit wasn't quite what they expected -- he is a lonely figure among Hollywood's big-hitters in backing the conservative candidate.

Eastwood, now 82, insisted this was not the case, when he made his infamous appearance at the Republican National Convention in Tampa, Florida, shortly before Romney formally accepted his party's nomination.

"I know what you're thinking. You're thinking, what's a movie tradesman doing out here? You know they are all left-wingers out there, left of Lenin," he told his conservative audience.

"At least that's what people think. But that's not really the case. There's a lot of conservative people, a lot of moderate people, Republicans, Democrats, in Hollywood."

He explained: "It's just that the conservative people, by the nature of the word itself, play it a little more close to the vest. They don't go around hot-dogging it. .. But they're there, believe me, they're there."

"Ocean's Eleven" star Clooney might object to the description "hot-dogging it" -- showing off -- but he's certainly not shy about posting his colors, hosting a lavish fundraiser at his Hollywood Hills home for Obama in May.

Dubbed "Starmageddon" and organized by DreamWorks Animation chief Jeffrey Katzenberg, the event was said to have made some $15 million. The guest list included Barbra Streisand, Robert Downey Jr., Jack Black and Billy Crystal.

Obama was back in Tinseltown earlier this month, for a fundraising show headlined by Stevie Wonder, Katy Perry and Earth, Wind and Fire -- as well as Clooney -- for which 6,000 people paid at least $250 a head.

As Obama and Romney battle down to the wire ahead of the November 6 election, the money is important in itself.

But equally important is the star power it brings to the commander-in-chief, who is battling for airtime and exposure that is not simply another rally in the exhausting home stretch of the 2012 election race.

"The main power of celebrity endorsements is to bring attention to a candidate; to persuade people who might otherwise not pay attention to check out a candidate and see what they represent," said Ross.

And while Hollywood stars are good for the profile, music stars may be even better.

A late addition is "Bat Out of Hell" rocker Meat Loaf, who threw his weight behind Romney Thursday, calling him a "man who will stand tall in this country and fight the storm and bring the United States back to what it should be."

But while stars can share some of their glitter with candidates, there is little evidence that voters actually vote based on the political views of a celebrity, be it Eastwood or Beyonce, who sang at Obama's inauguration.

"The American people are not stupid," said Ross.

"Few vote for a politician because a movie star or celebrity endorses them. Only... after the individual checks out the candidate might they be inclined to vote for them," he added.

But for all the Obama cheerleading from the entertainment industry, not everyone in Hollywood who supports Obama does so with the enthusiasm of four years ago.

"It kind of feels like if Obama doesn't get in and everything falls apart, maybe that's the way it's supposed to, in order for us to rebuild it. I'm going to vote, I've contributed in many ways but it's not going to kill me."

She added: "Obama should get elected, except there's so much money involved now, and there are a lot of people sulking because they're disappointed in Obama."

"Nothing can match the last time when he got in there. It was just so huge," she said.
Comments
US Election