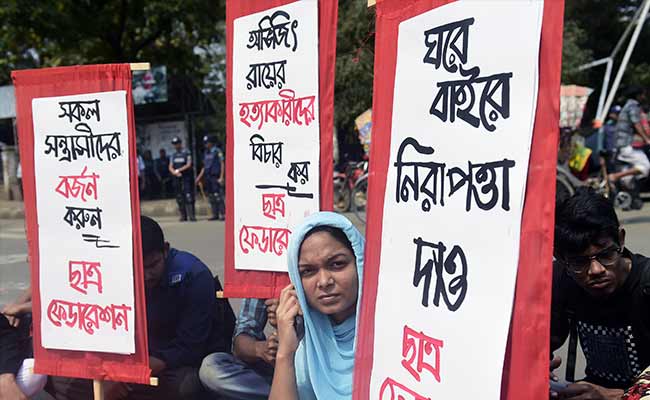 Dhaka:
Hundreds of protesters gathered in Dhaka on today to denounce the murder of a prominent American blogger of Bangladeshi origin hacked to death with machetes after he allegedly received threats from Islamists.
The demonstrators - including teachers, publishers and fellow writers - met near the spot where Avijit Roy, founder of Mukto-Mona (Free-mind) blog, was attacked by unknown assailants as he returned home from a book fair with his wife on yesterday evening.
They chanted slogans including "We want justice" and "raise your voice against militants".
No one has yet claimed responsibility for the vicious attack, which also seriously wounded the 44-year-old's wife and has shocked many in a country already reeling from weeks of violent political protest.
But the atheist writer's family said he had received numerous threats from Islamists before his death, and today's rally is expected to draw hundreds of Bangladeshis concerned about the rise in Islamism in their country.
Roy, a US citizen, is the second Bangladeshi atheist blogger to have been murdered in two years and the fourth writer to have been attacked since 2004.
"The attack on Roy and his wife Rafida Ahmed is outrageous," said Imran H. Sarker, head of a Bangladeshi bloggers' association.
"We strongly protest this attack and are deeply concerned about the safety of writers."
Hardline Islamist groups have long demanded the public execution of atheist bloggers and sought new laws to combat writing critical of Islam.
Police have launched an investigation and recovered the machetes used in the attack, which they compared to that on atheist blogger Ahmed Rajib Haider in 2013.
Haider was hacked to death by members of a little-known Islamist militant group, triggering nationwide protests by tens of thousands of secular activists.
"The pattern of the killing appeared to be the same that of previous attack on a celebrated writer," assistant commissioner of Dhaka police Shiblee Noman told AFP.
"It seems it it was carried out by reactionary fundamentalist group."
Noman also said police were investigating a tweet by the pro-Islamist group Ansar Bangla Seven that appeared to celebrate Roy's murder.
"Target Down here in #Bangladesh," the group tweeted from the @AnsarBn7 handle.
'Threatening' emails
Roy's wife, who is also a blogger, was moved to a clinic for further treatment on today.
The writer's father Ajoy Roy said he had received a number of "threatening" emails and messages on social media from hardliners unhappy with his writing.
Roy had written about 10 books, including the best-selling "Biswasher Virus" (Virus of Faith), as well as his blog, which championed liberal secular writing in the Muslim-majority nation.
The Center for Inquiry, a US-based charity promoting free thought, said it was "shocked and heartbroken" by the brutal murder of Roy.
"Dr. Roy was a true ally, a courageous and eloquent defender of reason, science, and free expression, in a country where those values have been under heavy attack," it said in a statement.
Roy's killing also triggered strong condemnation from his fellow writers and publishers, who lamented the growing religious conservatism and intolerance in Bangladesh.
Pinaki Bhattacharya, a fellow blogger and friend of Roy, said one of the country's largest online book retailers was being openly threatened for selling Roy's books.
"In Bangladesh the easiest target is an atheist. An atheist can be attacked and murdered," he wrote on Facebook.
After Haider's death, Bangladesh's hardline Islamist groups started to protest against other campaigning bloggers, accusing them of blasphemy and calling a series of nationwide strikes to demand their execution.
The secular government of Prime Minister Sheikh Hasina reacted by arresting some atheist bloggers.
The government also blocked about a dozen websites and blogs to stem the furore over blasphemy, as well as stepping up security for the bloggers.
Bangladesh is the world's fourth-largest Muslim majority nation with Muslims making up some 90 per cent of the country's 160 million people.
A tribunal has recently handed down a series of verdicts against leading Islamists and others for crimes committed during the war of independence from Pakistan in 1971.
Promoted
Listen to the latest songs, only on JioSaavn.com

Conspiracy Theories That US Let Loose Monkeypox Swirl In China