"The Royal Court mourns His Royal Highness... who passed away this morning at Mayo Clinic Hospital in the United States of America," the Bahrain News Agency said, adding that the country would enter a week of official mourning. 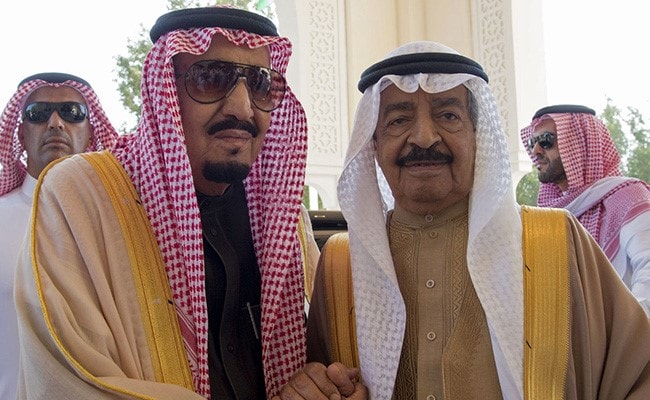 Bahrain's Prince Khalifa bin Salman al-Khalifa, the world's longest-serving prime minister who had held the post since independence in 1971, died Wednesday at the age of 84, state media announced.

Prince Khalifa was a controversial figure during his long time in office -- and deeply unpopular with the Sunni-ruled kingdom's Shiite population.

When Shiite-led protesters occupied Manama's Pearl Square for a month in 2011, before being driven out by Saudi-backed security forces, their main demand was for Khalifa to step down.

He played a key role in Bahrain's political and economic affairs for more than three decades after setting the stage for a referendum that put paid to the Shah of Iran's claims to the tiny Gulf archipelago.

But the prime minister, who was accused by dissidents of opposing political reforms and cracking down on activists, took a lower profile after his nephew King Hamad ascended the throne in March 1999.

Prince Khalifa passed away at the Mayo Clinic Hospital in the United States, the official Bahrain News Agency said.

The burial ceremony will take place after his remains are transported home, and in line with coronavirus restrictions the ceremony will be limited to a "specific number" of relatives, it said.

The country will hold a week of official mourning, during which flags will be flown at half-mast. Government ministries and departments will be closed for three days.

Born on November 24, 1935, Khalifa began to attend his father's royal court at the age of seven along with his elder brother, Prince Issa.

He was named in 1970 as the head of the state council, the executive branch of government which became the council of ministers after independence from Britain.

He conducted difficult negotiations with the Shah of Iran, Mohammad Reza Pahlavi, before independence over Shiite Iran's claims to the islands.

A referendum to determine Bahrain's future resulted in an overwhelming vote in favour of independence under the rule of the Sunni Al-Khalifa dynasty, despite the sizeable Shiite population -- whose size is disputed by the government to this day.

In 1972, elections were held for a constituent assembly which drafted Bahrain's first constitution the following year.

The first parliamentary elections were held in December 1973, but Sheikh Khalifa's government dissolved the chamber in August 1975 after it refused to pass a state security law giving the government wide powers of arrest and detention without trial.

Political unrest flared again in the early 1980s, and in late 1981 the government announced it had foiled an Iranian-backed coup attempt.

Prince Khalifa strove for many years to establish Bahrain as a regional financial hub. Unlike other Gulf states, the kingdom has only modest oil resources.

Ties have since continued to grow, with Bahrain now hosting the US Navy's Fifth Fleet as one of Washington's most trusted allies in the region.

Shiite-led demonstrations intensified in 1994, with protesters demanding the restoration of the elected parliament, the return of political exiles and a more equitable distribution of wealth.

The unrest, which claimed at least 38 lives, lasted until 1999, when King Hamad ascended the throne, initially as emir, and initiated reforms which turned Bahrain into a constitutional monarchy and reinstated the elected parliament in 2002.

But protesters were back on the street in February 2011, taking their cue from Arab Spring uprisings, demanding a "real" constitutional monarchy, with an elected premier to replace Khalifa.

Although the government quelled the protests after one month, the country continues to face political repression, with several opposition chiefs behind bars. At least 89 people were killed in the unrest.