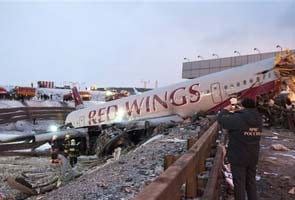 moscow: Russian investigators on Sunday blamed a defective brake system for a Moscow airport crash that killed five crew members when a liner skidded off the runway and smashed into a highway.

"The plane touched down in the proper landing area but for some reason was unable to stop on the strip," Federal Air Transport Agency chief Alexander Neradko said in televised remarks.

"According to preliminary data, the pilots used all the brake systems available on the plane," an unidentified investigator told the Interfax news agency.

"But for some reason, the aircraft failed to stop and continued moving" down the runway. "Most likely, the cause was defective reverse engines or brakes."

Red Wings said a flight attendant died of her injuries on Sunday to bring the toll to five. Three others were recovering in stable condition.

Greater loss of life was averted only because the 210-seat liner was empty except for the eight crew returning from a charter flight to the Czech Republic.

Cell phone footage of the accident posted online showed chunks of debris hurtling over the highway and crashing into cars whose drivers had to swerve and make emergency stops.

The jet split into three pieces and required the temporary shutdown of both the Kiev Highway and Vnukovo -- Moscow's third largest airport and the site of a special terminal for Kremlin officials.

Red Wings owner Lebedev -- a billionaire famous for his critical view of the Kremlin and his ownership of the London Evening Standard and The Independent in Britain -- said the jet had recently passed a meticulous check.

"Plane number 47 had accumulated 8,500 flight hours and underwent its last thorough check on November 23," Lebedev said on his Twitter feed.

He also suggested that traffic controllers' initial refusal to authorise landing -- requiring the plane to complete several circles over Vnukovo in bad weather -- may have been a contributing factor.

"All machinery has its limits, even when it is new," Lebedev wrote.

Russian media said the authorities had concerns about the Tu-204 jet's ability to stop in various weather conditions even before Saturday's crash landing.

They cited a letter sent by the state aviation watchdog Rosaviatsya to the jet's maker on Friday asking about an incident last week in which the engines failed to fire into reverse on landing.

The manoeuvre is required for the plane to slow down quickly upon touchdown.

The russianplanes.net aviation website said the very same jet had suffered an engine failure and was forced to make an emergency landing in June 2009.

Smoke could be seen coming out of the Tupolev's right engine after Saturday's incident.

Russianplanes.net said Lebedev's airline had in fact decided not to order any more Tu-204 planes after the 2009 incident because of the engine problems.

The latest line of Tupolev jets was developed in the late Soviet era as the preferred replacement for the workhorse Tu-154 liner that still dominates Russian skies.

But only 50 or so of the more modern versions of Tupolev are in operation because of slow orders and continuing efforts to modernise the jet's engines.

The planes that do fly are most often used by charter companies -- both private and those belonging to the state.

A spokesman for the Russian Football Union said the national squad used the plane that crashed on Saturday for its flights to away matches in 2009-10.

One photograph published online showed the Russian Football Union's insignia on one of the segments of the plane's debris.

The emergencies ministry says that some 200 Russians have died in air disasters in the past two years alone.