Bushfires in Australia have killed thousands of Koalas and injured several others. 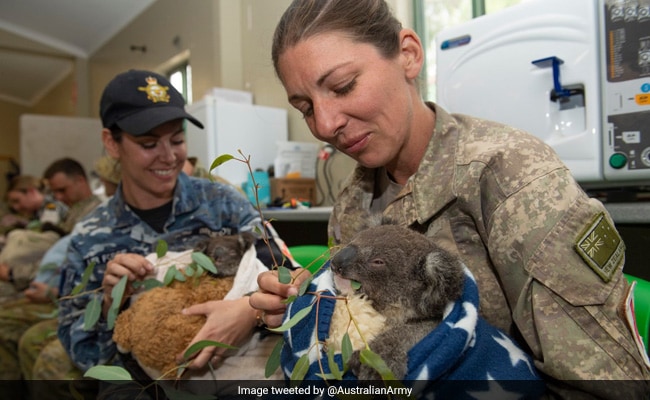 Photos of Australian soldiers feeding and cuddling rescued koalas are winning over the internet. The Australian Army shared the pictures on its official Twitter handle.

"Our People from 16th Regiment Emergency Support Force have used their rest periods while #OpBushfireAssist to lend a helping hand at the Cleland Wildlife Park, supporting our furry friends during feeding time and by building climbing mounts inside the park. A great morale boost for our hard working team in the Adelaide Hillsm" they wrote.

In the pictures, soldiers are seen cuddling the koalas -- swaddled in blankets -- at the Cleland Wildlife Park in Adelaide.

As the post went viral, social media has been abuzz with reactions. A user wrote: "Drop Bear battalion well done guys." Another wrote: "This makes me so damn proud to be an Aussie."

A post read, "This is so beautiful, you men and women are just incredible."

A user remarked, "I've just come back from a holiday in Adelaide. I was unlucky not to see any koalas in the wild but wonderful to see you doing a fab job with the wildlife. Thank you for helping to save them and maybe if I return in the future, they'll be abundant in the wild again."