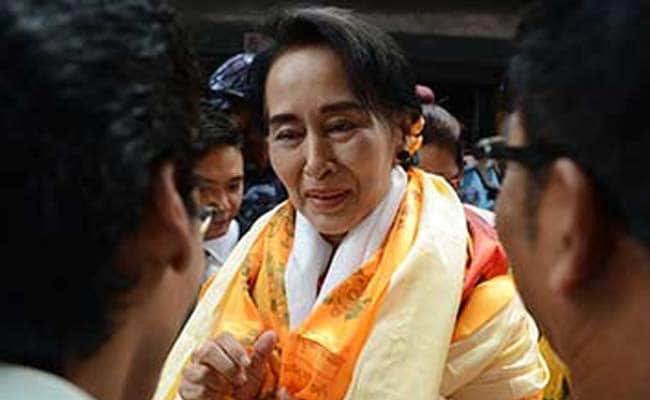 Yangon: Myanmar's indomitable opposition leader Aung San Suu Kyi has entwined her life with the politics of her country, but as she turns 70 today, "The Lady" is facing one of the greatest challenges of her decades-long freedom fight.

While her National League for Democracy (NLD) party is expected to triumph at key elections this year, Suu Kyi's pathway to the presidency is blocked by a controversial clause in Myanmar's junta-era constitution.

With polls slated for November, time is running out to change the contested clause before the vote and Suu Kyi's advancing age adds urgency to her quest of leading a democratic Myanmar.

Analyst Mael Reynaud said she was likely to defer an attempt to take the top job, but added much would depend on her acceptance by the country's old elites, in the form of the army and current ruling party, which remains dominated by former generals.

"The fact that she's getting older is indeed one further reason why she would want to get the constitution changed before the 2020 elections so she could become the president then," he told AFP.

Locked away for years by a former junta fearful of her huge popular support, Suu Kyi's decision to compromise with former military figures has seen her take a seat in parliament and opened the way for her hermetic homeland to step onto the global stage.

It is in keeping with her reputation for non-violent opposition to the junta, a fight that earned her a Nobel Peace Prize in 1991 and near rock star status at home and abroad.

How she will spend her birthday is unclear, but on Sunday she is expected to speak to hundreds of NLD supporters at a Yangon restaurant, as the nation's focus intensifies on the polls.

While still wildly popular, the rough and tumble of political life has muddied Suu Kyi's once flawless image.

She has faced censure for a reluctance to speak out on behalf of the country's maligned Muslim population.

She has also been criticised for failing to nurture a political successor within the NLD, meaning the party has no alternative presidential candidate to propose, regardless of how well it does in the polls.

A president will be selected by parliament after the elections.

The Myanmar constitution excludes those with foreign spouses and children from top political office, Suu Kyi's two sons are British.

The charter also enshrines the military's continued political clout with a quarter of parliamentary seats, a voting bloc that army MPs have vowed to use to stop major amendments.

As the daughter of the country's adored independence leader, having spent years abroad and a swathe of international dignitaries, including US President Barack Obama, among her avowed admirers, Suu Kyi's political pedigree is unmatched in Myanmar, according to biographer Peter Popham.

"There is nobody she could pick who she could deal with on equal terms," he told AFP.

It is a view reflected on the streets of Yangon.

Without an heir, the veteran activist could opt to throw her support behind a reformist member of the former military regime as a compromise presidential candidate.

International Crisis Group has said that possibility is a major source of uncertainty in the country's political transition.

Suu Kyi's transformation into a democracy champion happened almost by accident after she returned from Britain to the country formerly known as Burma in 1988 to nurse her sick mother.

Soon afterwards protests erupted against its military rulers, who crushed the uprising with a crackdown that left at least 3,000 people dead.

Suu Kyi proved to be a charismatic orator and took a leading role in the burgeoning pro-democracy movement, delivering speeches to crowds of hundreds of thousands.

Alarmed by the support she commanded, the generals ordered her first stint of house arrest in 1989.

She was locked up by the junta for a total of 15 years, mostly in her crumbling lakeside mansion in Yangon, without a telephone and with only the company of two female aides.

But the struggle for her country came at a high personal cost: Suu Kyi was unable to see her husband Michael Aris before his death from cancer in 1999, and missed seeing her sons grow up.

The then-ruling junta refused Aris a visa to visit her and Suu Kyi did not attempt to leave Myanmar during her few periods of freedom, fearing she would never be allowed to return.

Despite Suu Kyi's confinement, the NLD swept a national vote in 1990 by a landslide, but was never allowed to take power.

In her role as an MP, she entered parliament in 2012 after landmark by-elections, she has appeared willing to find consensus and compromise.

But as the party gears up for its best chance of political power in a quarter century, she has yet to fully commit to taking part.

"No one can know what will happen, so we have to calculate for every possibility," she told reporters in the capital Naypyidaw in April.