At least 28 hurt in blast at Bangkok opposition march: officials 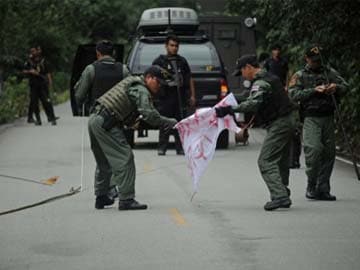 Members of a Thai bomb squad unit inspect the site of a roadside bomb blast triggered by suspected separatist militants in Thailand's restive southern province of Narathiwat on January 16, 2014

Bangkok: A bomb blast at an opposition protest march in Bangkok wounded at least 28 people, emergency officials said on Friday, in the latest unrest during a "shutdown" of the capital aimed at ousting the government.

"The latest figure we have is 28 injured," said an official from the city's Erawan emergency centre, in an updated figure.

She said there were no details of how serious the injuries sustained were.

Police were investigating what type of explosive device caused the blast.

Television footage showed several people lying on the ground as ambulances rushed away the wounded.

Protesters were seen searching nearby buildings for the attackers as police and soldiers arrived on the scene.

The blast is the latest attack on opposition protesters who have blocked roads and held rallies across the capital in a bid to topple the government of Prime Minister Yingluck Shinawatra and derail upcoming February 2 elections.
Comments
Thailandbomb blast