As US Reels, Mike Pence, Kamala Harris Square Off In VP Debate

With Trump infected with the coronavirus that has already killed more than 210,000 Americans, the Pence-Harris showdown has taken on an unusually pressing quality, given that the White House deputy is just a heartbeat away from the presidency. 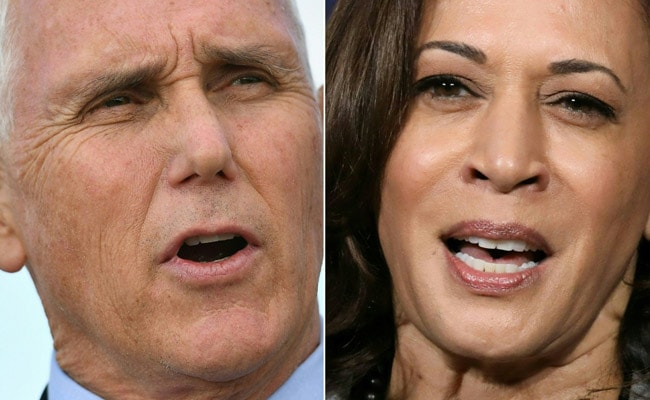 Kamala Harris and Mike Pence will have their first debate on Wednesday.

For once in a rollercoaster US election, Donald Trump and Joe Biden yield the spotlight Wednesday to Vice President Mike Pence and the Democrat seeking his job -- Kamala Harris -- as they debate for the first time.

With Trump infected with the coronavirus that has already killed more than 210,000 Americans, the Pence-Harris showdown has taken on an unusually pressing quality, given that the White House deputy is just a heartbeat away from the presidency.

The duel in Salt Lake City occurs as the nation lurches from one crisis to another.

Not only has the president tested positive; coronavirus has spread through his inner circle, infecting dozens of top advisors, administration staff, senior military officials and Republican lawmakers.

Racial and political tensions are simmering, prompting Biden to issue a clarion call for national unity and warn that "the forces of darkness" and division are "pulling us apart."

Trump -- who is confined to the White House as he recovers from Covid-19 -- continued his all-out verbal offensive, branding Biden "a wacko" in a stream of angry tweets fired off since he left hospital on Monday.

The president is confronted by dire polling numbers ahead of the November 3 election, which comes as the economy staggers from Covid shutdowns that have left countless families and businesses struggling.

Trump also keeps warning that he may not accept the election result, arguing that mail-in ballots lead to fraud, while Senate Republicans are rushing to confirm Trump's Supreme Court nominee even as some in their caucus are in quarantine.

As the president rages, the ultra-loyal Pence is under pressure to signal some stability and relay an administration plan for how to tackle the pandemic four weeks from election day.

"Vice President Mike Pence is ready. He is prepared to prosecute the case against the California radical extremist of Kamala Harris," Trump campaign advisor Mercedes Schlapp told FOX News, setting the tone for the debate.

"We know that Mike Pence will be able to also talk about the president's strong accomplishments on the economy and also on combating Covid," she said.

There may be little appetite, though, for a repeat of the disastrous opening Trump-Biden debate, which was marred by their constant interruptions and personal insults.

Wednesday's event has strengthened health measures, with organizers agreeing to allow Harris to be separated from Pence by plexiglass.

Both participants have tested negative for coronavirus, and Pence reportedly opposes the use of a barrier.

"If the Trump administration's war on masks has now become a war on safety shields, that tells you everything you need to know about why their Covid response is a failure," Harris press secretary Sabrina Singh said.

Still being treated for the coronavirus after three nights in hospital, Trump has scrambled to resume his reelection campaign.

The latest polls forecast victory for Biden, with CNN giving the Democrat a national advantage of 57 percent to 41 percent among likely voters.

White House doctors say he is recovering rapidly and Trump is doubling down on his controversial position that Covid-19 is taken too seriously, painting himself as a fighter who took on the virus and won.

After urging Americans to stop fearing Covid-19 and "don't let it dominate you," he attacked the media for not paying more attention to what he said were his many successes.

But Trump is in trouble on almost every front, and what used to be his strongest card -- the economy -- is not helping, with the shock caused by coronavirus yet to dissipate.

Trump is working overtime to persuade voters that he is back to full strength.

He and Biden are scheduled to square off again October 15, but Biden told reporters that "if he still has COVID, we shouldn't have a debate."