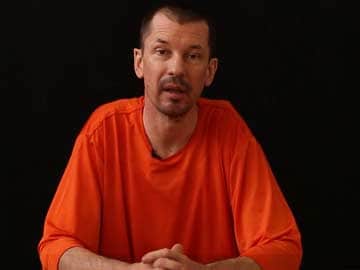 New York: As U.S. airstrikes began raining down on the de facto capital of the Islamic State in Syria on Monday night, the militant group issued a new installment in its "lecture series" delivered by a British hostage, John Cantlie.

In the propaganda video, Cantlie is again seated at a table wearing an orange jumpsuit, in a reference to the outfits worn by Muslim prisoners at U.S. detention centers at Guantanamo Bay, Cuba. He reads from a prepared script, explaining how the United States' involvement in the Syrian conflict will mirror its misadventures in Vietnam.

"In this program, we'll see how the Western governments are hastily marching towards all-out war in Iraq and Syria without paying any heed to the lessons of the recent past," Cantlie says. "Not since Vietnam have we witnessed such a potential mess in the making."

The 5-minute, 55-second forced "lecture" is the second in less than a week, following the first circulated on Thursday. Of interest is how the Islamic State seems intent on using Western figures to try to sway U.S. opinion. Cantlie begins by quoting a former Central Intelligence Agency officer, Michael Scheuer, whom he praises for his knowledge of the Middle East.

"So, let's get straight to the point with a quote from former-CIA-chief-turned-vigorous anti-intervention-campaigner Michael Scheuer: 'President Obama does not have the slightest intention of defeating the Islamic State,'" Cantlie says.

Later on, he quotes Thomas H. Kean, the former New Jersey governor, who he says acknowledged that intelligence officials failed to anticipate the growing threat.

"Western governments (were) caught napping by the sheer speed of the Islamic State's growth," Cantlie adds.

A freelance journalist who has worked for The Sunday Times of London and The Telegraph, Cantlie was traveling with James Foley, a U.S. reporter, when the two were kidnapped on a Syrian road just 25 miles south of the Turkish border on Nov. 22, 2012.

They were the first of nearly two dozen foreign hostages abducted over the next 14 months who ended up in the same jail in Raqqa, the capital of the Islamic State. They included 19 men and four women, and starting in March, the Europeans were released for ransoms averaging 2 million euros per captive, according to one former hostage.

Promoted
Listen to the latest songs, only on JioSaavn.com
Britain, like the United States, is one of the few countries in the world that has held to a strict, zero-concessions policy, and by June, the only prisoners left in the jail on the outskirts of an oil installation in Raqqa were three British and four U.S. citizens. The Islamic State began beheading them in August, starting with Foley, and videos of their murders were posted on YouTube. Cantlie is one of only four hostages, including another British man and two Americans, from the original group still in captivity.

Cantlie ends by inviting viewers to watch for the next installment: "Join me again for the next program."
© 2014, The New York Times News Service