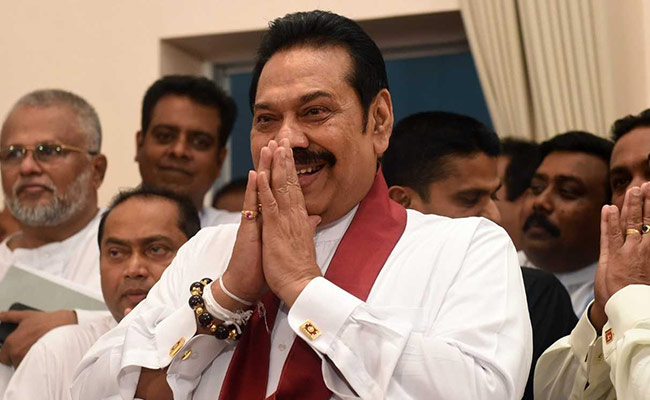 Sri Lanka's rival prime ministers battled to tempt lawmakers from opposing sides Tuesday as they sought numbers to swing any parliamentary vote of confidence to end the country's constitutional crisis.

While Wickremesinghe has been backed by the United States and other countries in calling for the suspension to be lifted, both sides have been marshalling their support for a vote that will decide the rivals' fate.

Rajapaksa, 72, gave four legislators from Wickremesinghe's party ministerial portfolios after persuading them to defect on Monday.

Wickremesinghe, who has refused to leave the prime minister's residence since he was sacked, has in turn convinced two lawmakers from Sirisena's camp to join his United National Party.

Following the defections, Wickremesinghe has 105 MPs in the 225-seat chamber while Rajapaksa and Sirisena together have 98.

A majority of the 22 remaining MPs are expected to back Wickremesinghe in any vote but the horse-trading is sure to intensify, observers said.

"I am telling China not to spend their millions to buy MPs in SriLanka. They want to buy the country wholesale," he said.

Rajapaksa led a pro-China policy during his 10 years as president up to 2015. But the claim was denied by the Chinese embassy in Colombo.

"Recent allegations about China by MP Ranjan Ramanayake are groundless and irresponsible," said an embassy statement to AFP.

Despite calls for a parliamentary vote to end the crisis, Sirisena showed no sign of lifting the suspension which runs until November 16.

"If he (the president) has the majority there is no need to keep parliament shut. He wants to buy time to do some horse deals," Samaraweera said.

Parliament speaker Karu Jayasuriya, who on Monday said there would be a "bloodbath" unless the assembly votes, stepped up his warnings of unrest in an official letter to the president calling for the suspension to be lifted.

"If you do not, we will not be able to stop people taking alternate action to protect their democratic rights," Jayasuriya said in the letter seen by AFP.

"In the name of democracy, I urge you to reconsider your decision to prorogue parliament and allow justice to be served."

Jayasuriya said more than 125 legislators had signed a petition seeking the reconvening of the assembly.

Tensions have already been heightened by the killing of one activist in the capital on Sunday.

Sirisena appointed a 12-member cabinet late Monday giving the powerful finance portfolio to Rajapaksa. Aides said the cabinet will be expanded to 30 members on Tuesday.

Rajapaksa -- whose rule was marked by grave allegations of rights abuses and authoritarianism -- said he was given the job because his predecessor's party "engaged in a quest to sell off valuable state assets and enterprises to foreign companies".

"I was aware that at this moment of national peril, the people expected our leadership and protection," Rajapaksa said after the cabinet was named. "Hence, I accepted the invitation."