On Monday, when leaders at the Group of Seven summit traveled home after the three-day meeting, their differences appeared to have sharpened, and many agreements seemed further out of reach. 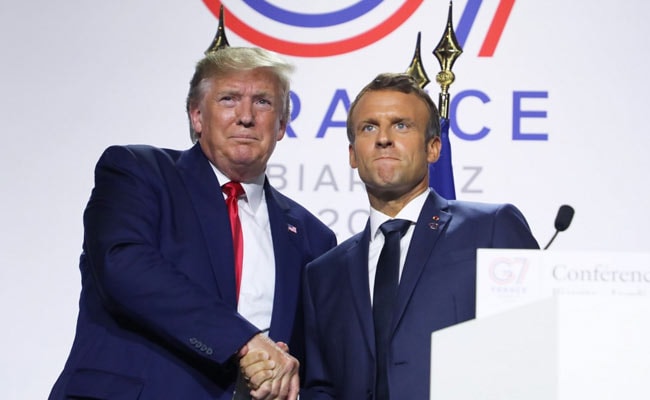 As the G-7 meeting broke up, many of the most pressing issues on the global agenda remained unresolved

On Monday, when leaders at the Group of Seven summit traveled home after the three-day meeting, their differences appeared to have sharpened, and many agreements seemed further out of reach. And in his concluding news conference, Trump appeared content with the way the meeting ended - without major breakthroughs.

All eyes were on the U.S. president, in part because of the burgeoning trade war between the White House and China. Trump said that he felt personal "unity" during talks, and that he was pressed to explain his strategy by several world leaders but wouldn't back down.

He defended the wild gyrations in his negotiating style - sometimes leveling blistering attacks on China and then pivoting to effusive praise - as a time-honored tactic he has used for years with glowing results.

"Sorry, it's the way I negotiate," he said. "It's done very well for me over the years, and it's doing even better for the country."

As the G-7 meeting broke up, many of the most pressing issues on the global agenda remained unresolved, in part because Trump was still deciding how to proceed. For example, he said he planned to continue pressing China with trade penalties if President Xi Jinping did not agree to major concessions. He continued his blunt attacks on the 2015 Iran nuclear deal as "ridiculous," even as French President Emmanuel Macron - one of the deal's top defenders - stood by his side.

He expressed an openness to meeting with Iranian President Hassan Rouhani, but only on strict terms, although he did signal new willingness to ease economic pressure on Iran by giving it a credit line.

And Trump mocked many Americans who have said the White House should move quickly to address climate change. The president, who has taken steps to side with energy companies and withdraw the United States from major climate pacts, said that the country controls tremendous wealth in its energy resources and that he wouldn't sacrifice that over environmental concerns.

The U.S. and other world leaders have met at annual G-7 summits since 1975, and they have published a joint agreement during every meeting except one, in 2002. The summit that ended Monday concluded with a short, one-page declaration that papered over many of their differences, a reflection of how far Trump has pulled the consortium from its goal of tackling global issues together.

Macron, who hosted the summit, tried to tout the small successes the group had, considering the low expectations many had going into the meeting.

"There was a lot of nervousness at the outset, a lot of expectations, a lot of tension," he said during a joint news conference with Trump. "What we were really keen on was to convey a positive and joint message following our discussions."

But at its conclusion, little of substance was accomplished aside from an agreement to devote $20 million to combat sprawling fires in the Amazon and the movement on Iran. French officials also said they had brokered a deal with Trump regarding the taxation of U.S. technology companies, but U.S. officials wouldn't confirm any details.

The summit was supposed to be about much more.

A growing number of countries has launched costly trade wars. North Korea has restarted its missile-testing programs. Relations between South Korea and Japan have broken down. Economies in Europe are stumbling toward recession. Britain is close to pulling away from the European Union without any deal.

Leaders touched on some of these issues during discussions, but nothing was resolved.

Even the Amazon funding pledge, the main concrete takeaway, was denounced by one main intended beneficiary, Brazilian President Jair Bolsonaro, who accused Macron of treating his country as though it were a "colony."

While he talked publicly about "great unity" at the G-7, Trump was privately reveling in his role as a spoiler who kept the other world leaders on edge, according to a senior European official who spoke on the condition of anonymity to discuss the president's behavior at closed-door meetings.

After the summit ended, Trump flew back to the United States, promising that trade talks with China had restarted. But he didn't offer evidence of progress. His proclamation was the latest in a whipsaw of comments about Beijing that has seized global markets and world leaders, with everyone nervous about the fallout if talks fall apart yet again.

"We're having very meaningful talks," Trump said. "Much more meaningful than at any time, I would think."

Three days earlier, Trump described Xi as an "enemy" of the United States.

The United States is a member of the G-7 along with Canada, the UK, France, Germany, Italy, and Japan. Last year, Trump left the G-7 summit in Canada early and tried to withdraw from the joint agreement he had already signed, though Canadian officials said that was not possible.

This year, French officials realized weeks in advance that it would be impossible for Trump to agree on a substantive joint statement that called for a consensus on trade and energy policy, issues that Trump sees as core political matters. Many of Trump's comments at the summit were based on issues that could come up ahead of his reelection bid next year, though he claims to never make any decisions based on political concerns.

Trump met with numerous world leaders here, and his actions were studied closely. He skipped, for example, a joint meeting on climate change, an issue that his administration has been dismissive of since his election. He boasted about a new trade deal with Japanese leader Shinzo Abe, though Japanese Foreign Ministry spokesman Takeshi Osuga said Monday that talks were still at a more preliminary stage.

He also continued to press his counterparts to allow Russian President Vladimir Putin to rejoin the G-7 next year, when Trump hosts it in the United States, but there was no agreement on whether to do it. The group shunned Putin in 2014 after Russia annexed Crimea from Ukraine.

Trump on Monday blamed Russia's ouster from the group on former president Barack Obama and came close to defending Russia's move, saying the nation had submarines and ships docked in Crimea.

At its anticlimactic conclusion, the summit showed how much Trump has been able to redraw the world order in less than three years. Trump ran for president on a nationalist agenda, mocking international consortia as ineffective and counter to U.S. interests.

For two years, other leaders tried with mixed success to convince him that these organizations were helpful. And although Trump has continued attending, the joint statements have become more watered down and shallow. The Group of 20 meeting in Japan two months ago ended with a bifurcated statement on climate that every country except for the U.S. approved.

Trump's role has been to isolate the U.S. from much of the global consensus without offering an alternative path for solving problems of international scope, said Brian Klaas, who teaches global politics at University College London.

"Six of the nations in the G-7 broadly agree on key policy priorities and how to move forward to address them," he said. "When 'America First' becomes 'America alone,' as it increasingly has throughout Trump's presidency, the United States unilaterally disarms itself of its most powerful weapon: leadership that shapes agendas and moves allies to act."

On Monday, Trump showed more interest in the next G-7 than the current one. He said he planned to host it at his golf resort in Doral, Florida, citing the ample space and a large nearby airport. White House officials would not say whether the plan had been vetted by ethics officials or whether he would be able to accept money from the numerous foreign visitors that would likely be attending months before his reelection bid.

"With Doral, we have a series of magnificent buildings, we call them bungalows," Trump said, echoing his pitchman past as a real estate developer. "They each hold from 50 to 70 very luxurious rooms, with magnificent views. We have incredible conference rooms, incredible restaurants. It's like, such a natural."

It was impossible to tell how much the Doral announcement, as with many from Trump lately, had been planned or whether it was just another idea he was floating to gauge reaction.

Trump has lurched wildly in the past week, proposing tax cuts and then pulling them off the table. Planning a trip to Denmark and then canceling it. Ordering companies to prepare to leave China and then backing away. Aides have tried to explain away his comments by brushing aside some and doubling down on others, but world leaders still don't know how to decipher his statements and some have stopped trying.

The G-7's one-page joint final statement, clocking in at just over 250 words, was a sign of how little substance had been achieved after world leaders gathered in France with a disruptive U.S. president, said Klaas.

"When there's very little substance, you get short statements," he said. "Most major global challenges are exactly that - global. You can't solve them alone."