As Concern About North Korea Deepens, The US And China Are At Odds

Tuesday's launch was a display of the North's longest-reaching weapon yet - an intercontinental ballistic missile with a range that experts say covers Alaska. 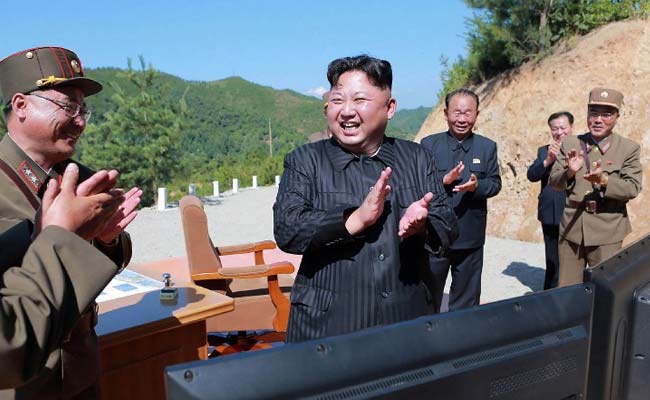 BEIJING: The Trump administration has called for "global action" on North Korea, but as concern about the July 4 missile test and its aftermath deepens, the world's biggest players, the United States and China, are at odds about what to do next.

Tuesday's launch was a display of the North's longest-reaching weapon yet - an intercontinental ballistic missile with a range that experts say covers Alaska.

Before his inauguration, President Donald Trump said North Korea's plan to develop an ICBM capable of hitting the United States "won't happen" and he has since repeatedly talked tough on the issue. His main strategy to stop it counted on help from Beijing, the North's financial lifeline.

But with the risk of armed conflict on the rise and Kim Jong Un taunting him, Trump must now craft a new strategy amid deep divisions.

In the wake of Tuesday's test, China and Russia issued a joint statement condemning North Korea and calling for what they called a "double suspension," a plan that would see the United States and South Korea suspend joint military exercises and North Korea suspend weapons testing.

But by early Wednesday morning, Asia time, U.S. and South Korean forces were firing missiles of their own, conducting joint military exercises that U.S. Pacific Command cast as a show of "ironclad" resolve - but seemed sure to rile Beijing.

Trump then took to twitter, appearing to blame China for failing to tighten the economic noose. "Trade between China and North Korea grew almost 40% in the first quarter. So much for China working with us - but we had to give it a try," he tweeted without elaborating on the trade statistic.

Chinese data released in April showed China's trade with the North grew 37.4 percent during the first three months of the year compared with the same period in 2016. China said then that overall trade grew even as it complied with U.N. sanctions and stopped buying North Korean coal.

Trump's annoyance with China makes it even less likely he would consider the Beijing-Moscow plan, analysts said.

Daniel Pinkston, a lecturer in international relations at Troy University in Seoul, said he saw no chance the United States and South Korea would agree to halt joint exercises, especially after the North's latest missile test. "It's a non-starter, it's just not going to happen," he said.

Deng Yuwen, a Beijing-based expert on North Korea, sees a growing divide between the positions of the United States, South Korea and Japan, on one hand, and China and Russia on the other.

"Two opposing blocs have been formed," he said.

The missile the Kim regime launched Friday had been in the works for years. It flew higher and remained in the air longer than previous attempts, in what experts called a milestone for North Korea

South Korean authorities described the North's test as a two-stage missile with a range of about 4,300 to 5,000 miles - enough to reach Alaska and other parts of North America.

South Korean Defense Minister Han Min-koo said there is high probability that Pyongyang will stage another nuclear test. He also noted gains in its efforts to miniaturize a warhead - both steps toward developing nuclear-tipped weapons capable of hitting the mainland United States.

North Korean state media carried gleeful descriptions of the test. Official accounts had Kim "feasting his eyes" on the ICBM.

"With a broad smile on his face," he urged scientists to send more "big and small 'gift packages'" to the Americans, in time for Independence Day, according to North Korea state press.

Kim was quoted as saying that the "protracted showdown with the U.S. imperialists has reached its final phase."

On the other side of the fortified line separating the two Koreas since the 1950s, senior U.S. and South Korean military officials warned that North Korea's actions threatened peace.

"Self-restraint, which is a choice, is all that separates armistice and war," Gen. Vincent K. Brooks, commander of U.S. forces in South Korea, and Gen. Lee Sun-jin, chairman of the South's Joint Chiefs of Staff, said in a statement.

Trump hoped to head off all these problems. Since becoming president, he has focused his efforts - and his tweets - on getting Beijing to pressure Pyongyang.

The plan took shape during talks in April with Chinese President Xi Jinping at Mar-a-Lago, where the leaders appeared to put aside differences in the name of cooperation on North Korea and trade.

In recent weeks, there have been signs that Trump is frustrated with China's progress. On June 21, he tweeted: "It has not worked out."

On Tuesday, as news of the North Korean test broke, but before the missile was confirmed to be an ICBM, the president vented again. "Hard to believe that South Korea and Japan will put up with this much longer," he wrote.

"Perhaps China will put a heavy move on North Korea and end this nonsense once and for all!"

China, in turn, is frustrated by Trump's public scoldings and worried about his changing plans.

"The international community has no solutions," said Song Xiaojun, who used to run a government-linked military magazine. "The U.S. wants to transfer the burdens to China."

Li Bin, a senior fellow at Beijing's Carnegie-Tsinghua Center for Global Policy, cautioned that any move by the United States or its allies is likely to renew Chinese fears that Washington is tackling North Korea to bolster its regional power and contain China's rise.

Both foreign and Chinese experts seemed perplexed that the United States still did not seem focused on talks with the Kim regime.

"The first obvious step is talking to them. That's just kind of Diplomacy 101," said John Delury, an assistant professor at Seoul's Yonsei University.

"Obama didn't do enough about that, either," he added. "There has been a severe drought of talking at a high level with North Koreans."

The Washington Post's Dan Lamothe in Washington, and Shirley Feng, Luna Lin and Yang Liu in Beijing contributed to this report.

(This story has not been edited by NDTV staff and is auto-generated from a syndicated feed.)
Comments
North korea missileChina on North KoreaUS China diplomacy