It was the first time a power cut had affected the entirety of both Argentina, with a population of more than 44 million, and Uruguay, which has 3.4 million inhabitants. 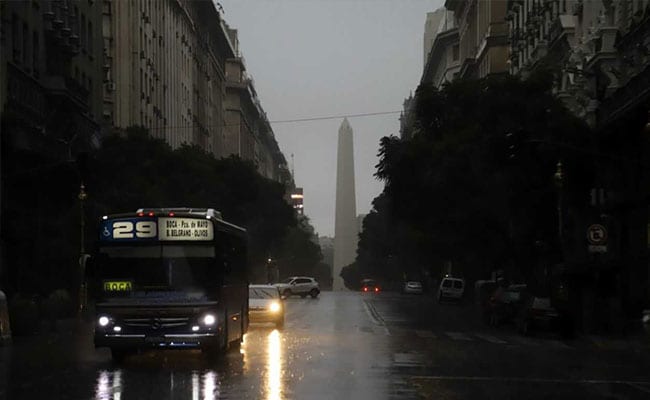 Electricity services have been restored to more than 70 percent of Argentina and Uruguay following a massive blackout that left around 48 million people without power on Sunday, authorities said.

At around 7:00 pm, Argentina's Energy Ministry Gustavo Lopetegui said services had been restored to 77 percent of customers in the country. There are still outages in multiple provinces, while Tierra del Fuego, in the country's extreme south, was spared because it is not part of the national system.

In neighboring Uruguay, the state power company UTE said power had returned to at least 88 percent of the country.

The cut, which happened just after 7:00 am, also affected Paraguay, which reported short, localized losses of power.

It was the first time a power cut had affected the entirety of both Argentina, with a population of more than 44 million, and Uruguay, which has 3.4 million inhabitants.

"These are failures that occur (even) with diligence. The amazing thing is the chain of events that took place to cause the total disconnection," Lopetegui told a press conference.

He said the outage took place "automatically to protect the system."

"We don't have any more information right now on how it occurred. We're not ruling out any possibility, but a cyber attack is not among the main alternatives being considered."

Argentina's energy secretariat said the "interconnection system" had "collapsed," producing "a massive power cut" for which its generators had been unable to compensate, but that the causes had not been determined.

Sources from the official energy agency of Paraguay, which borders Argentina to the northeast, told AFP that cuts there had been "momentary."

A spokesperson for RGE, the biggest energy distributor in Brazil's southern Rio Grande do Sul state that borders both Argentina and Uruguay, said they'd had no reports of cuts.

Earlier in the day, power had returned to some sectors of Buenos Aires but the metro and trains were still halted.

Public hospitals and private clinics were running on generators.

"The only inconvenience is the elevators. We only have one working, but all services are operating without problems," said an employee at the Fernandez Hospital.

It is Father's Day in Argentina and some restaurants were expecting many customers.

"This killed us," Luciano Ferreira, the owner of a popular restaurant in the Boedo neighborhood of Buenos Aires, told AFP.

The restaurant had been fully booked and Ferreira had been expecting to make two or three times as much money as a normal day.

Some people shared messages on WhatsApp with advice on how to prepare for a lengthy outage, such as collecting water.

In the interior plains region of Junin, residents stocked up on drinking water sold in supermarkets.

"Fortunately, we had two buckets on the patio that were filled with rain water. We've gone back to the Stone Age," Eduardo Gralatto told AFP.

"We decided to open because we need to work, but early on we lost seven or eight tables of customers because we couldn't prepare coffee or bake bread," Carlos Arce, the owner of a bakery, told AFP.

Argentines also went to the polls in several provinces on Sunday to elect governors, with some local media reporting voters cast ballots by candle light.

More than an hour after the blackout, UTE said its system was being brought back "from zero."