"All They Do Is Talk": Trump Slammed Europe Over Lack Of Support For Ukraine, Call Transcript Shows

The United States has been a key supporter of Ukraine, once part of the Soviet Union, since 2014, when Russia annexed Crimea. 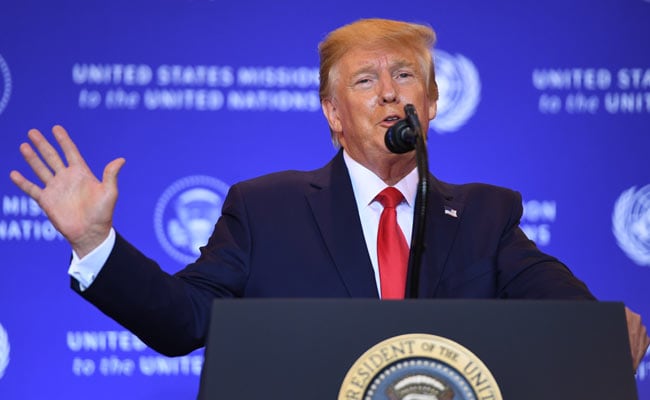 Donald Trump's criticism of Europe emerged when the transcript was released

In a July telephone call to Ukrainian President Volodymyr Zelensky, Donald Trump attacked European countries for failing to support Ukraine in its conflict with Russia, a transcript showed Wednesday.

Trump's criticism of Europe emerged when the transcript was released amid an opposition push to impeach the president for urging Zelensky to investigate his US political rival Joe Biden.

The United States has been a key supporter of Ukraine, once part of the Soviet Union, since 2014, when Russia annexed Crimea.

"We do a lot for Ukraine. We spend a lot of effort and a lot of time -- much more than the European countries are doing and they should be helping you more than they are," Trump told Zelensky during the call.

"Germany does almost nothing for you. All they do is talk.

"(German Chancellor) Angela Merkel, she talks Ukraine, but she doesn't do anything."

Zelensky replied, saying he agreed "1,000 percent," according to the transcript.

"The European Union should be our biggest partner but technically the United States is a much bigger partner," said Zelensky, who came to power in May.

He thanked the US for its support on defense, and added that Ukraine was "almost ready" to buy more anti-tank Javelin missiles from the United States.

While contrasting the amount and type of aid delivered from different countries can amount to comparing apples and oranges, multiple measurements indicate that the EU has contributed more aid than the United States.

Among them are figures from the Organisation for Economic Co-operation and Development, which said EU institutions gave more than double the average amount of aid to Ukraine from 2016 to 2017 compared to the United States, a measurement that does not even take into account individual European member states' contributions.

At a press conference with Zelensky at the UN General Assembly on Wednesday, Trump added that European countries "have to feel a little bit guilty" and "should spend a lot more."

On Tuesday, the US president said he had frozen hundreds of millions of dollars in aid to Ukraine, but only to force European allies to increase their support for Zelensky's government.

Trump has denied any wrongdoing for urging his Ukrainian counterpart to investigate Biden and has dismissed the impeachment probe.