The reporter informed Robert Mueller's spokesman, Peter Carr, that he and a colleague had "a story coming stating that Michael Cohen was directed by President Trump himself to lie to Congress about his negotiations related to the Trump Moscow project." 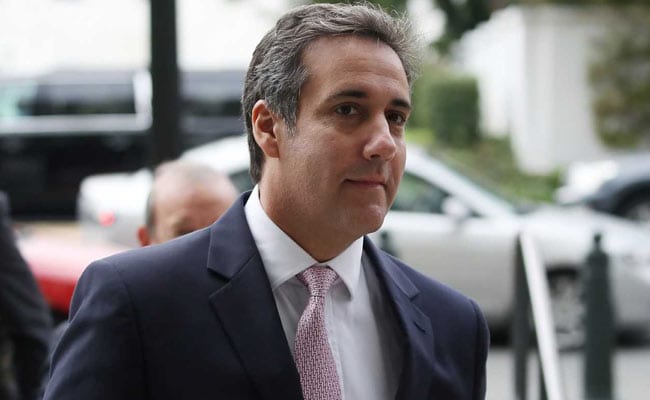 "I made these misstatements out of loyalty to Individual 1," Michael Cohen said referring to Donald Trump

When a BuzzFeed reporter first sought comment on the news outlet's explosive report that President Donald Trump had directed his lawyer to lie to Congress, the spokesman for special counsel Robert Mueller III treated the request as he would almost any other story.

The reporter informed Mueller's spokesman, Peter Carr, that he and a colleague had "a story coming stating that Michael Cohen was directed by President Trump himself to lie to Congress about his negotiations related to the Trump Moscow project," according to copies of their emails provided by a BuzzFeed spokesman. Importantly, the reporter made no reference to the special counsel's office specifically or evidence that Mueller's investigators had uncovered.

"We'll decline to comment," Carr responded, a familiar refrain for those in the media who cover Mueller's work.

The innocuous exchange belied the chaos it would produce. When BuzzFeed published the story hours later, it far exceeded Carr's initial impression, people familiar with the matter said, in that the reporting alleged that Cohen, Trump's former lawyer and self-described fixer, "told the special counsel that after the election, the president personally instructed him to lie," and that Mueller's office learned of the directive "through interviews with multiple witnesses from the Trump Organization and internal company emails, text messages, and a cache of other documents."

In the view of the special counsel's office, that was wrong, two people familiar with the matter said, speaking on the condition of anonymity to discuss internal deliberations. And with Democrats raising the specter of investigation and impeachment, Mueller's team started discussing a step they had never before taken: publicly disputing reporting on evidence in their ongoing investigation.

"I think that the BuzzFeed piece was a disgrace to our country. It was a disgrace to journalism, and I think also that the coverage by the mainstream media was disgraceful, and I think it's going to take a long time for the mainstream media to recover its credibility," Trump said Saturday. "It's lost tremendous credibility. And believe me, that hurts me when I see that."

Many people are saying that the Mainstream Media will have a very hard time restoring credibility because of the way they have treated me over the past 3 years (including the election lead-up), as highlighted by the disgraceful Buzzfeed story & the even more disgraceful coverage!

BuzzFeed has stood by its reporting.

"As we've reconfirmed our reporting, we've seen no indication that any specific aspect of our story is inaccurate. We remain confident in what we've reported, and will share more as we are able," Matt Mittenthal, a spokesman for the news outlet, said Saturday.

People familiar with the matter said Carr told others in the government that he would have more vigorously discouraged the reporters from proceeding with the story had he known it would allege Cohen had told the special counsel Trump directed him to lie - or that the special counsel was said to have learned this through interviews with Trump Organization witnesses, as well as internal company emails and text messages.

Carr declined to comment for this story beyond the special counsel's office statement issued Friday.

After Carr declined to comment to BuzzFeed, but before the story was published, he sent reporter Jason Leopold a partial transcript of Cohen's plea hearing, in which Cohen admitted lying to Congress about the timing of discussions related to a possible Trump Tower project in Moscow, according to the emails BuzzFeed's spokesman provided. Cohen had claimed falsely that the company's effort to build the tower ended in January 2016, when in fact discussions continued through June of that year, as Trump was clinching the Republican nomination for president.

"I made these misstatements to be consistent with Individual 1's political messaging and out of loyalty to Individual 1," Cohen said at his plea hearing late last year, using the term "Individual 1" to refer to Trump.

Peter Carr, Robert Mueller's spokesman, people familiar with the matter said, hoped Jason Leopold, reporter for BuzzFeed, would notice that Michael Cohen had not said during the hearing that Donald Trump had explicitly directed him to lie (File Photo)

Carr, people familiar with the matter said, hoped Leopold would notice that Cohen had not said during the hearing that Trump had explicitly directed him to lie. But Leopold, who co-authored the story with reporter Anthony Cormier, told the spokesman he was not taking any signals, and Carr acknowledged the point.

"I am not reading into what you sent and have interpreted it as an FYI," Leopold wrote.

A person inside the Trump Organization said a BuzzFeed reporter also talked with a lawyer for the organization hours before the story posted and was warned that the story was flawed and should be scrutinized further. Mittenthal said, "We trust our sources over the organization still run by Donald Trump's family. That organization is directly implicated in the allegations related to the Trump Tower Moscow project, and refused to speak on the record for our story."

The language Cohen and his representatives used in court had been ambiguous. Cohen had pleaded guilty in two cases - one for lying to Congress about the Moscow project, and another involving campaign finance violations for hush-money payments to women who had alleged affairs with Trump.

While neither Cohen nor his representatives had ever said explicitly that Trump directed Cohen to lie to Congress, Guy Petrillo, Cohen's attorney, wrote in a memo in advance of his sentencing, "We address the campaign finance and false statements allegations together because both arose from Michael's fierce loyalty to Client-1. In each case, the conduct was intended to benefit Client-1, in accordance with Client-1's directives."

Client-1 refers to Trump. Petrillo declined to comment Saturday. It is unclear precisely what "directives" Petrillo was referring to, though he did not allege elsewhere in the memo that Trump explicitly instructed Cohen to lie to Congress. He wrote that Cohen was "in close and regular contact with White House-based staff and legal counsel to Client-1" as he prepared his testimony and "specifically knew . . . that Client-1 and his public spokespersons were seeking to portray contact with Russian representatives in any form by Client-1, the Campaign or the Trump Organization as having effectively terminated before the Iowa caucuses of February 1, 2016."

People familiar with the matter said after BuzzFeed published its story - which was attributed to "two federal law enforcement officials involved in an investigation of the matter" - the special counsel's office reviewed evidence to determine if there were any documents or witness interviews like those described, reaching out to those they thought might have a stake in the case.

They found none, these people said. That, the people said, is in part why it took Mueller's office nearly a day to dispute the story publicly. In the interim, cable news outlets and other media organizations, including The Washington Post, dissected its possible implications - even as their reporters were unable to independently confirm it.

Told of the special counsel's failure to find support for the story, Mittenthal, the BuzzFeed spokesman, said, "Our high-level law enforcement sources, who have helped corroborate months of accurate reporting on the Trump Tower Moscow deal and its aftermath, have told us otherwise. We look forward to further clarification from the Special Counsel in the near future."

Two people familiar with the matter said lawyers at the special counsel's office discussed the statement internally, rather than conferring with Justice Department leaders, for much of the day. In the advanced stages of those talks, the deputy attorney general's office called to inquire if the special counsel planned any kind of response, and was informed a statement was being prepared, the people said.

Around 7:30 p.m. Friday, Carr distributed it to numerous media outlets via email.

"BuzzFeed's description of specific statements to the Special Counsel's Office, and characterization of documents and testimony obtained by this office, regarding Michael Cohen's congressional testimony are not accurate," he wrote.

BuzzFeed, though, asserted that the language was not specific about what was being contested.

"We stand by our reporting and the sources who informed it, and we urge the Special Counsel to make clear what he's disputing," BuzzFeed editor Ben Smith said in response to the special counsel's statement.

Cohen has not addressed BuzzFeed's reporting, and BuzzFeed has made clear he was not a source for its story. Lanny Davis, a legal and communications adviser to Cohen, said before the special counsel statement was issued, "Out of respect for Mr. Mueller's and the Office of Special Counsel's investigation, Mr. Cohen declined to respond to the questions asked by the reporters and so do I." He declined to address it after the special counsel's office released the statement.

The Washington Post's Shane Harris and Tom Hamburger contributed to this report.