"We are a company that provides platforms for diverse perspectives and opinions - and there is no shortage of them among our own employees," Sundar Pichai said Google CEO Sundar Pichai confronted a barrage of criticism Tuesday from House Republicans who said his company suppresses conservative voices, exposing Google to the same kind of scrutiny that has destabilized its tech peers this year. Pichai insisted that Google is careful to avoid political bias in its search engine and other products.

"To do otherwise would go against our core principles and our business interests," said Pichai, testifying for the first time before Congress. "We are a company that provides platforms for diverse perspectives and opinions - and there is no shortage of them among our own employees."

Yet in an interview with The Washington Post after the hearing, Pichai acknowledged that Google navigates tricky waters in setting global policies on issues such as hate speech or political opinions that might spread falsehoods - or appear as censorship. He said Google needs to do more work in "areas where the world doesn't quite agree."

The stakes could rise dramatically if Google re-enters China, where the company shut down its Chinese-language search engine in 2010 over security and censorship concerns. In the Post interview, Pichai said the company has an internal effort to develop a product aimed at the Chinese market, though he declined to say what it was or whether it was likely to be a search engine.

"For us, this work had many purposes. Can we explore and serve users in China, in areas like education and health care?" Pichai said. "We may not end up doing search. We're trying to understand a market."

But employees have revolted against a project that many see as counter to Silicon Valley ideals of free speech. "Our principles apply for us globally," he added. "We have many ways we can approach it."

Google has long had at least occasional contact with Chinese officials after its retreat from the country, Pichai said. The renewed effort to work in China, dubbed Project Dragonfly and made public through news reports this year, has sparked sharp political backlash on Capitol Hill.

Pichai's interrogation in front of the House Judiciary Committee capped a yearlong inquiry by the panel into allegations that Google and its tech peers stifle conservatives online. Democrats had objected to the hearing series from the beginning, arguing that Republicans were playing politics. But the two parties still appeared to share broad concerns about Google's algorithms and data-gathering on the Android mobile operating system and other Google offerings, such as its dominant search engine.

Pichai is the third tech CEO - following Facebook's Mark Zuckerberg and Twitter's Jack Dorsey - to submit to a grilling on Capitol Hill this year after long avoiding the harsh congressional spotlight. Yet the questions about Google's privacy practices, its next big tech bets and its ability to police hate speech only stand to intensify as lawmakers increasingly focus on how Silicon Valley operates, and tech-skeptical Democrats prepare to take the reins in the House of Representatives in 2019.

The 3.5 hour hearing Tuesday began with a pointed question when House Majority Leader Kevin McCarthy, R-Calif., asked, "Are America's technology companies serving as instruments of freedom - or instruments of control?"

Other Republicans, including Rep. Steve Chabot, Ohio, at one point charged that Google's search algorithm is "in effect picking winners and losers" and potentially even "affecting elections." They delivered their rebukes while conservatives including Alex Jones, banned from YouTube for his conspiracy theory videos and threats to journalists, looked on from the back of the hearing room.

In response, frustrated Democrats led by Rep. Jerry Nadler, N.Y., called the premise of the hearing itself a "fantasy" and part of a "right-wing conspiracy." Nadler said lawmakers should have focused on the ways the internet has become a "new tool for those seeking to stoke racial and ethnic hatred. The presence of hateful conduct and content in these platforms has been made all the more alarming by the recent rise in hate-motivated violence." Other Democrats signaled such oversight could come in 2019, when they take over control of the chamber.

"I look forward next year to working with you on some of the very serious questions we face," said Rep. Zoe Lofgren, D-Calif. "It's pretty obvious bias against conservative voices is not one of them."

Democrats and Republicans also warned Google about building a search engine that would work with China's government-controlled internet. In response, the Google leader said the company would brief Congress before proceeding. Pichai, who acknowledged in questioning from lawmakers that about 100 people have worked on the project but repeatedly said Google has "no plans" to offer a new product for China, later told The Post that it was too soon to put any parameters on the effort. 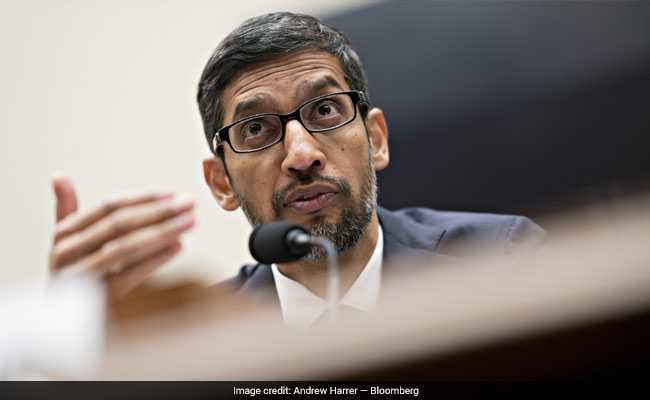 Members of both parties pressed Pichai on the privacy implications of the company's sweeping data-collection practices across a range of services, including Gmail, Google Search and the Android mobile operating system. A day after Google revealed a new mishap jeopardized the data of about 52 million users of its soon-to-be-deactivated social networking service, Pichai told lawmakers, "We always think there is more to do."

Yet Pichai's mild-mannered responses - often offering more nuance than lawmakers sought or promising to have his staff follow up later on tricky questions - did not always satisfy some Republicans. Rep. Ted Poe, R-Texas, at one point held up his iPhone and demanded to know whether Google would detect if he walked across the hearing room and sat among the Democratic lawmakers.

As Pichai attempted to answer, adding that he needed to know more about the Apple device's settings before answering, Poe interrupted, saying, "It's not a trick question. You know, you make $100 million a year. You ought to be able to answer that question."

Rep. Jamie Raskin, D-Md., also took an aggressive tone with Pichai in citing a Washington Post story on Tuesday regarding the rampant spread of hateful, conspiratorial videos on YouTube.

Pichai said the company had made progress in policing some types of problematic content, but he added, "We are looking to do more. This was a recent thing, but I'm committed to following up on it, making sure we are evaluating these against our policies. But it's an area where we acknowledge there's more work to be done and will definitely continue doing that."

Raskin didn't relent, saying that while Republicans have accused the company of political bias, the hateful conspiracy videos have the potential to provoke violence, as happened in 2016 when a man who had watched a Pizzagate conspiracy video on YouTube fired shots in a Northwest Washington pizzeria.

"There is material that is a true public danger," Raskin told Pichai. "I think the point at which it becomes a matter of serious public interest is when your communication vehicle is being used to promote propaganda that leads to violent events."

Speaking with The Post after the hearing, Pichai acknowledged that Google still had more work to do in crafting and enforcing policies on hate speech and other offensive content online.

"I do think we've definitely gotten better at areas where you're better able to clearly define policies, where there's less subjectivity," said Pichai, pointing to YouTube, where the company's machine-learning tools have been put to use to spot and take down terrorist content.

But he appeared to grapple with the harder calls. "How do you draw lines in a way that is right, (and) you don't make mistakes on either side," he said, "and how do you do it responsibly?"