The dining restrictions in the China-ruled Asian financial hub ban eating in any outlet after 6 p.m. At other times in the day, restaurants can only operate at half-capacity and with two people per table. 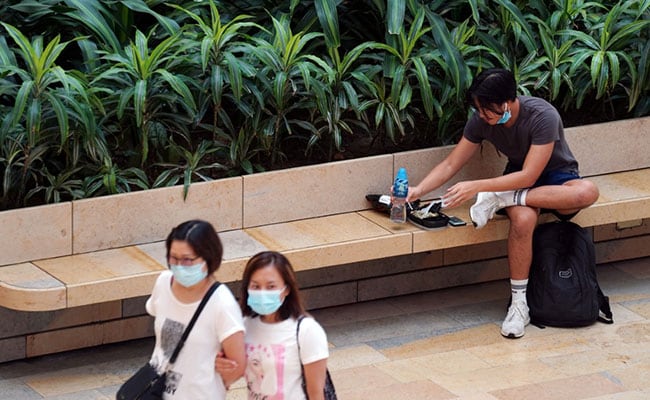 A deluge of trash from takeaway containers and disposable cutlery is cluttering the streets and parks of Hong Kong as coronavirus restrictions on dining in restaurants eat away at the city's capacity to dispose of its garbage.

The dining restrictions in the China-ruled Asian financial hub ban eating in any outlet after 6 p.m. At other times in the day, restaurants can only operate at half-capacity and with two people per table.

As a result, plastic from eating out has doubled from last year since takeaway food is the only option for many people who do not cook at home. Hundreds of thousands of people in the crowded city live in compact apartments with tiny or non-existent kitchens.

Pavements in residential and office areas are littered with Styrofoam boxes and coffee cups spilling out from bins, while plastic bags and wrappers are seen floating at popular swimming sites.

"For many people, the biggest issue is they don't deal with their own waste on a daily basis so they aren't realising the scale of their own consumption," said Tracey Read, founder of Plastic Free Seas in Hong Kong.

The city's residents are consuming more than 101 million disposable plastic items for takeaway every week, according to environmental group Greeners Action, more than double the amount discarded last year.

Hong Kong's government said existing landfills will reach capacity this year and in June it announced it was disposing of human graves to further extend one site.

Single use plastic tableware is one of the top ten categories of marine litter in Hong Kong, according to the World Wildlife Fund Hong Kong.

"Emerging food delivery online platforms are definitely one of the contributors exacerbating the severity of the problem," said June Wong, an executive at WWF Hong Kong who focuses on marine litter and plastic.

A waste charging bill, proposed over a decade ago and aimed at tackling soaring waste, was put off the legislative agenda again in June due to time constraints.

Edwin Chau, executive director at the Green Earth NGO, said the city needed much stronger measures, for instance expanding a plastic collection and recycling scheme to all districts and a landfill ban for plastic.

"Hong Kong cannot not afford to keep ignoring its own waste crisis," he said.

Two US Lawmakers Test Positive For Covid After Capitol Attack