About an hour after the headline went viral, the Times announced that it had amended its wording. "The headline was bad and has been changed for the second edition," a spokesperson for the Times told The Washington Post in an email. 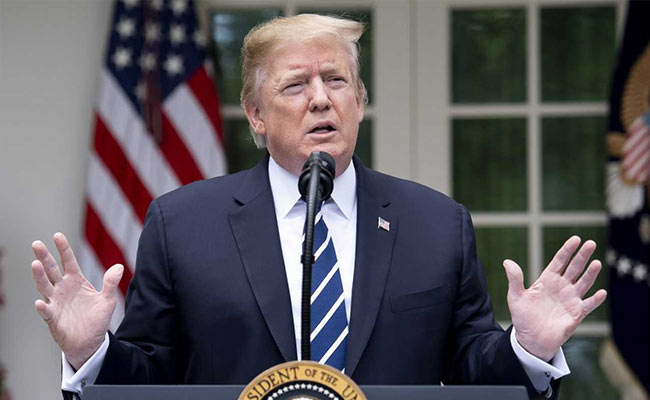 The New York Times weathered intense backlash Monday night for its front-page headline about President Trump's response to the pair of mass shootings that read: "TRUMP URGES UNITY VS. RACISM."

A preview of Tuesday's front page shared to social media sparked instant criticism from members of the public, journalists and politicians, including several 2020 Democratic presidential candidates, many of whom took issue with how the publication framed Trump's comments on the weekend attacks in El Paso and Dayton, Ohio, that left at least 31 people dead and dozens injured. In the aftermath of the tragedies, major media outlets have faced scrutiny from all sides over how they confront Trump and his often inflammatory rhetoric.

About an hour after the headline went viral, the Times announced that it had amended its wording.

"The headline was bad and has been changed for the second edition," a spokesperson for the Times told The Washington Post in an email.

Later editions of the print paper feature the words, "ASSAILING HATE BUT NOT GUNS." Subheads above the two stories about Trump's speech were also changed.

The original headline appeared to start gaining widespread attention around 9 p.m. when it was posted on Twitter by FiveThirtyEight's Nate Silver, who wrote, "Not sure 'TRUMP URGES UNITY VS. RACISM' is how I would have framed the story." By early Tuesday, Silver's tweet had nearly 18,000 likes and more than 3,000 retweets.

Reading from a teleprompter on Monday, Trump spoke about setting "destructive partisanship aside" and using "one voice" to "condemn racism, bigotry, and white supremacy" - a message that diverged from the slew of divisive, and at times racist, statements the president has publicly directed at minorities ranging from immigrants to lawmakers. The president's scripted address also contained no mention of new gun legislation, The Washington Post's Dan Balz reported.

In one of two stories on the speech that appeared under the Times' headline, reporters Michael Crowley and Maggie Haberman made similar observations, writing that it "seemed unlikely" Trump's comments "would reposition him as a unifier when many Americans hold him responsible for inflaming racial division."

For many, the headline fell short of the expectations placed on media outlets in the Trump era to provide context, and in some cases fact-checking, when reporting on the president's remarks. The news media only fairly recently started describing some of Trump's questionable statements as "lies," The Post's Paul Farhi wrote in June.

But Smith wasn't the only person to rail against the headline.

"Unbelievable," tweeted former Rep. Beto O'Rourke, D-Texas, on Monday. After a weekend vigil for the El Paso shooting victims, the presidential candidate had strong words for a reporter who asked him what Trump could do to "make this any better," responding in part, "You know the s--- he's been saying . . . I don't know, like, members of the press, what the f---?"

O'Rourke was joined by fellow Democratic presidential hopefuls Sens. Cory Booker, D-N.J., and Kirsten Gillibrand, D-N.Y., and New York Mayor Bill de Blasio, who all weighed in on the headline.

"Lives literally depend on you doing better, NYT," Booker tweeted. "Please do."

"That's not what happened," Gillibrand tweeted.

In a tweet tagging the Times' official account, de Blasio wrote, "Hey . . . what happened to 'The Truth Is Worth It?' Not the truth. Not worth it."

The headline also earned a sharp rebuke from Rep. Alexandria Ocasio-Cortez, D-N.Y., who tweeted that the front page should "serve as a reminder of how white supremacy is aided by - and often relies upon - the cowardice of mainstream institutions."

The headline also drew outcry from a number of journalists, who slammed it as "inaccurate" and "absurd."

Ed Cara, a writer for Gizmodo, predicted that the headline "might very well be taught in journalism class someday, but not for a good reason."

For the Daily Beast's media reporter Maxwell Tani, the headline was not only "bad," but also "particularly confusing because it essentially contradicts the smart piece below it," he tweeted, pointing to an article written by Times reporter, Alexander Burns. In the online version, the article's headline is "Shootings Spur Debate on Extremism and Guns, With Trump on Defense."

Still, some critics were so irked that they went as far as canceling their subscriptions to the publication, a move that triggered a debate over whether it was an appropriate response to the mistake.

"It doesn't matter that the underlying journalism is often very good," one person tweeted. "Headlines matter more than ever . . . Refusing to take that seriously is a sign of a failing institution that is not up to the challenge. I'll spend my money on other outlets."

"One headline writer's mistake is not cause enough to close the door on an army of truly great journalists who don't write the headlines," tweeted Julie K. Brown, an investigative reporter with the Miami Herald.

In a follow-up tweet, Brown added: "Bottom line is you hurt all of journalism and, by extension, democracy, by punishing a newspaper for a headline. Self defeating at a time when we need journalists more than ever."

"Have you ever written a headline?" Wilber tweeted. "It is hard. You are sitting there, trying to fit the entire story into 4 words. Maybe 3. Depends on characters. You are on crazy deadline. And you are also copy editing the story."

Crafting a headline is "art," he wrote in another tweet.

"This headline was penned . . . by some poor copy editor on the night shift trying sum up one of the most complicated issues of our time (race, violence, murder, immigration, bigotry, presidential history) in four words," Wilber wrote.