Afghanistan-Taliban Crisis LIVE Updates: There were two Afghan senators and 24 Afghan sikhs among the evacuees. 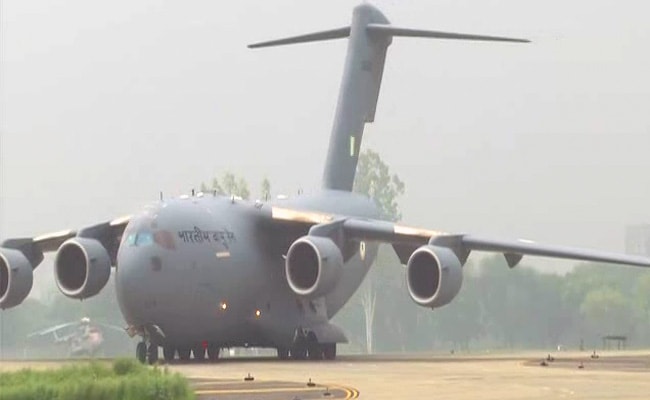 A special repatriation flight by the Indian Air Force landed at the Hindon air base near Delhi.

A special repatriation flight by the Indian Air Force - carrying 168 passengers, including 107 Indians - landed this morning at the Hindon air base near Delhi from Kabul. There were two Afghan senators and 24 Afghan sikhs among the evacuees.

They will be moved to the Bangla Sahib Gurdwara next. Many of the evacuees are from a Gurdwara in Kabul, where they have been staying for days.

"I feel like crying...Everything that was built in the last 20 years is now finished. It's zero now," a visibly emotional Afghanistan's senator Narender Singh Khalsa told news agency ANI upon landing in Delhi.

In a string of tweets earlier, the External Affairs Ministry spokesperson, Arindam Bagchi, posted details of the evacuation efforts. He also posted a short video clip where the evacuees can be seen chanting "Bharat Mata Ki Jai".

Sources said on Saturday morning the government is trying to bring as many Indians as possible into the airport at Kabul to keep them safe while it works out the evacuation logistics.

India has evacuated all embassy staff but an estimated 1,000 citizens remain in several Afghan cities and ascertaining their location and condition is proving to be a challenge, the Home Ministry has said.

The Taliban took control of Afghanistan Sunday, after President Ashraf Ghani fled and the group walked into Kabul with no opposition. This was after a staggeringly fast rout of major cities, after two decades of war that has claimed hundreds of thousands of lives.

Here are the LIVE Updates on Afghanistan-Taliban crisis:

Aug 22, 2021 20:18 (IST)
"Accept Taliban, Do Not Support Them": Former Afghan President's Brother
Hashmat Ghani, the brother of former Afghan President Ashraf Ghani, told NDTV on Sunday that he had "accepted" the Taliban to avoid instability, and that he had chosen to stay in the country to help in the transition period, but had not offered the group his "support".
Mr Ghani told NDTV that these were "very different things" and that his acceptance was to spare his country further political and economic problems - which he said had been underlined by the "devastating" departure of business leaders - following the Taliban taking control.
Aug 22, 2021 15:32 (IST)

Afghanistan News: Afghan Senator Breaks Down After Reaching India On Air Force Plane
Two Afghan senators were among the 24 Sikhs who landed in India this morning, repatriated from the war-torn nation that's now under the control of Taliban.
Aug 22, 2021 15:09 (IST)
US To Blame For Kabul Airport Evacuation Chaos: Taliban Official
The United States was to blame for the chaos at Kabul's airport as thousands of Afghans clamoured to be evacuated, a senior Taliban official said Sunday. "America, with all its power and facilities... has failed to bring order to the airport. There is peace and calm all over the country, but there is chaos only at Kabul airport," said Amir Khan Mutaqi, a Taliban official.
Aug 22, 2021 13:54 (IST)
Afghan Resistance Ready For Conflict But Prefers Negotiations
Former Afghan government forces forming a resistance movement in a fortified valley are preparing for "long-term conflict", but are also seeking to negotiate with the Taliban, their spokesman told AFP in an interview. Since the Taliban took control of the country following a lightning charge into the capital Kabul, thousands of people have made their way to Panjshir to both join the fight and find a safe haven to continue their lives, Ali Maisam Nazary said.
Aug 22, 2021 13:45 (IST)
"I Thank India For Helping Us": Afghan Woman Evacuated From Kabul
The situation in Afghanistan is "deteriorating", an Afghani woman refugee, who was among 168 people evacuated from Kabul on a special Air Force flight this morning, told news agency ANI. The woman said she, her daughter and her two grandchildren had been forced to flee after the Taliban "burnt down my house", and she thanked the Indian government for rescuing them. Read Here
Aug 22, 2021 13:28 (IST)
Afghan Returnees In India To Be Vaccinated Against Polio: Health Minister
India has decided to vaccinate Afghanistan returnees against polio for free as a preventive measure against the wild polio virus, Union Health Minister Mansukh Mandaviya said on Sunday. The minister also shared a photo where returnees could be seen getting jabs at the Delhi international airport. Afghanistan and Pakistan are the only two countries in the world where polio is still endemic.
Aug 22, 2021 13:17 (IST)
Video Of Girl Kissing Baby Captures Relief In Reaching India From Kabul
Two infants were among 168 people, including 107 Indian citizens and two Afghani senators, evacuated from Kabul on a special Air Force flight this morning. The plane landed safely at the Hindon airbase in Ghaziabad near Delhi. Visuals shared by news agency ANI showed one of the infants in the arms of the mother, while a young girl (presumably the older sister) smiles happily and kisses the baby, who seems rather bewildered by the many new sights and sounds. Read Here
Aug 22, 2021 12:52 (IST)
7 Killed In Chaos Near Kabul Airport, Says UK Defence Ministry
Seven Afghan civilians have died in the chaos near Kabul airport, the British defence ministry said Sunday. "Our sincere thoughts are with the families of the seven Afghan civilians who have sadly died in crowds in Kabul," a ministry spokesperson said.
Aug 22, 2021 12:34 (IST)
US Spain Agree Use Of Military Bases In Spain For Afghan Refugees
US President Joe Biden and Spanish Prime Minister Pedro Sanchez agreed two military bases in southern Spain can be used to receive Afghans who have worked for the U.S. government, the Spanish government said on Sunday. In a 25-minute telephone conversation on Saturday night, Biden and Sanchez agreed Moron de la Frontera near Seville and Rota near Cadiz can be used for refugees from Afghanistan until their travel to other countries is arranged.
Aug 22, 2021 12:21 (IST)
A special repatriation flight by the Indian Air Force - carrying 168 passengers, including 107 Indians - landed this morning at the Hindon air base near Delhi from Kabul. There were two Afghan senators and 24 Afghan sikhs among the evacuees. They will be moved to the Bangla Sahib Gurdwara next. Many of the evacuees are from a Gurdwara in Kabul, where they have been staying for days.
Aug 22, 2021 11:41 (IST)
Video: "Everything Built In Last 20 Years finished," Says Afghan Senator
Two Afghan senators were among the 24 Sikhs who landed in India this morning, repatriated from the war-torn nation that's now under the control of Taliban. One of them, Senator Narender Singh Khalsa, was in tears. Asked about how the situation was in Afghanistan, he broke down. Read Here
Aug 22, 2021 11:20 (IST)
Afghan Returnees To Get Free Polio Vaccine In India

We have decided to vaccinate Afghanistan returnees with free Polio Vaccine - OPV & fIPV, as a preventive measure against Wild Polio Virus

Take a look at the vaccine drive at Delhi International Airport pic.twitter.com/jPVF1lVmRu

#WATCH | 168 passengers, including 107 Indian nationals, arrive at Hindon IAF base in Ghaziabad from Kabul, onboard Indian Air Force's C-17 aircraft

Passengers are yet to come out of the airport as they will first undergo the #COVID19 RT-PCR test.#Afghanistanpic.twitter.com/x7At7oB8YK

Aug 22, 2021 10:10 (IST)
JUST IN |  A special repatriation flight by the Indian Air Force - carrying 168 passengers, including 107 Indians - landed at the Hindon air base near Delhi from Kabul.
Aug 22, 2021 09:59 (IST)
Afghans Face "Impossible" Race Against Time To Flee Kabul
Tens of thousands of Afghans were racing Sunday to flee their country as the United States warned of security threats at Kabul's chaotic airport and the European Union said it was "impossible" to evacuate everyone at risk from the Taliban. In the week since the hardline Islamist militants took back power in Afghanistan, the Taliban have vowed a softer version of their brutal rule from 1996-2001, and taken steps towards forming a government.
Aug 22, 2021 09:50 (IST)
Anti-Taliban Forces Say They've Taken 3 Districts In North Afghanistan
Forces holding out against the Taliban in northern Afghanistan say they have taken three districts close to the Panjshir valley where remnants of government forces and other militia groups have gathered. Defence Minister General Bismillah Mohammadi, who has vowed to resist the Taliban, said in a tweet that the districts of Deh Saleh, Bano and Pul-Hesar in the neighbouring province of Baghlan to the north of Panjshir had been taken.
Aug 22, 2021 09:17 (IST)
Australia Evacuates More Than 300 Overnight From Afghanistan: Scott Morrison
Australia ran four flights into Kabul, Afghanistan, on Saturday night, evacuating more than 300 people, including Australians, Afghan visa holders, New Zealanders, U.S. and British citizens, Prime Minister Scott Morrison said on Sunday. The news came after the United States and Germany told their citizens in Afghanistan to avoid travelling to Kabul airport, citing security risks as thousands tried to flee almost a week after Taliban Islamists took control.
Aug 22, 2021 08:34 (IST)
US, Germany Advise Against Travel To Kabul Airport Amid Evacuation Chaos

The United States and Germany told their citizens in Afghanistan on Saturday to avoid travelling to Kabul airport, citing security risks as thousands of desperate people gathered trying to flee almost a week after Taliban Islamists took control. The Taliban's co-founder, Mullah Baradar, arrived in the Afghan capital for talks with other leaders. The group is trying to hammer out a new government after its forces swept across the country as U.S.-led forces pulled out after two decades, with the Western-backed government and military collapsing.

Evacuation continues!
IAF special repatriation flight with 168 passengers onboard, including 107 Indian nationals, is on its way to Delhi from Kabul. pic.twitter.com/ysACxClVdX

Aug 22, 2021 07:49 (IST)
JUST IN| Two flights carrying Indians evacuated from Kabul landed in Delhi from Dushanbe and Doha this morning.