Afghanistan Crisis LIVE Updates: US 'Concerned' By Taliban Government Makeup But Will Look At 'Actions'

"We understand that the Taliban has presented this as a caretaker cabinet. However, we will judge the Taliban by its actions, not words." 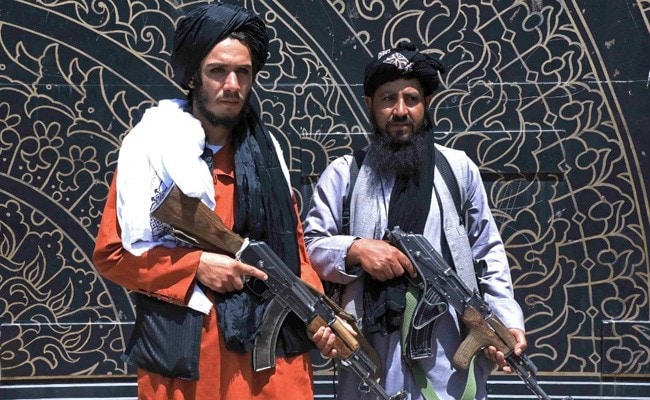 The United States said it was concerned about members of a Taliban government named Tuesday but said it would judge it by actions, including letting Afghans leave freely.

"We note the announced list of names consists exclusively of individuals who are members of the Taliban or their close associates and no women. We also are concerned by the affiliations and track records of some of the individuals," a State Department spokesperson said as Secretary of State Antony Blinken held talks on Afghanistan in Qatar.

"We understand that the Taliban has presented this as a caretaker cabinet. However, we will judge the Taliban by its actions, not words."

Meanwhile, US Secretary of State Antony Blinken on Tuesday praised the Unites Nation's role in Afghanistan where the Taliban seized control last month and said its work has never been more important.

Same Old Taliban After All: 10-Point Guide To New Afghanistan Cabinet
The Taliban's interim government, drawn from their own loyalist ranks, has hardliners in all key posts and no women - far from the "inclusive" administration it had promised. In growing protests against the group, two people were shot dead in Herat.
Sep 08, 2021 14:10 (IST)

No Public Protests: Taliban Issues Clear Warning After Anti-Pak Rally
The Taliban announced their government on Tuesday, with a UN-blacklisted veteran of the hardline movement in the top role, weeks after they swept to power and toppled the US-backed president.
Sep 08, 2021 13:42 (IST)

Life In Afghanistan Will Be Regulated By Laws Of Holy Sharia
The Taliban drew from its inner high echelons to fill top posts in Afghanistan's new government on Tuesday, including an associate of the Islamist militant group's founder as premier and a wanted man on a U.S. terrorism list as interior minister.
Sep 08, 2021 13:04 (IST)

CIA Chief William Burns Met Ajit Doval In New Delhi Amid Taliban Government Formation
National Security Adviser Ajit Doval met with US spymaster William Burns in Delhi on Tuesday. The meeting took place on a day when the Taliban announced the names of people who would run Afghanistan.
Sep 08, 2021 12:36 (IST)

Complete Guide To The New Taliban Government And Its Big Players
The Taliban announced their government on Tuesday, with a UN-blacklisted veteran of the hardline movement in the top role, weeks after they swept to power and toppled the US-backed president.
Sep 08, 2021 12:28 (IST)
Sep 08, 2021 12:07 (IST)

Minister of Education Sheikh Molvi Noorullah Munir Says Master's Degree Not Valuable
Less than a month after the Taliban returned to rule Afghanistan, a new cabinet was unveiled Tuesday with the world leaders left to wonder about their future relations with the South Asian nation.
Sep 08, 2021 11:58 (IST)

"As far representation is concerned, we all wanted things to be inclusive. But there is no women or Shias in the current Cabinet that has been announced": @SeemaSirohi, Columnist, The Economic Times pic.twitter.com/cA7xAwxlHl

Haqqanis, FBI's Most-Wanted, In Taliban Government Exposes Pak Role
As the Taliban announced its new hardline interim government on Tuesday, Pakistans stamp was evident in the inclusion of two Haqqanis in the cabinet, including Sirajuddin Haqqani as Interior Minister.
Sep 08, 2021 11:14 (IST)

"One side not represented in this dispensation is the 'shura' in the western part of #Afghanistan. I now foresee a situation seen in failed states, where states can control but unable to govern": Manoj Joshi, ORF pic.twitter.com/HBjzQydJsX

Taliban Government Is "Anything But Inclusive": Afghan Envoy At UN
The government announced by the Taliban in Afghanistan is "anything but inclusive" and the Afghan people will not accept a governing structure that excludes women and minorities, the country's envoy to the UN has said.
Sep 08, 2021 10:04 (IST)

"India's caution has been validated. We were not sure who were the real #Taliban. Now, the militant wing embedded in the Haqqani group is calling the shots with the support of GHQ (Pakistan Army)": Vishnu Prakash (@ambvprakash), Former Ambassador pic.twitter.com/fIgpM1CpZr

Afghanistan's Tiananmen Square Moment - When A Woman Faced Taliban Gun
An Afghan woman faces an armed Taliban man in one of the many compelling images that emerged from protests in Kabul on Tuesday against the hardline group.
Sep 08, 2021 09:38 (IST)

Quiet Taliban Deal Maker Abdul Baradar Holds Key Role For Afghan Future
He co-founded the Taliban, helped it rebuild during two decades of war with the U.S. and then brokered a deal to get American troops out. Now, Mullah Abdul Ghani Baradar's job is about to get even harder.
Sep 08, 2021 09:19 (IST)

Joe Biden Says He Is Sure China Will Try To Work Out Arrangement With Taliban
U.S. President Joe Biden said on Tuesday he was certain China would try to work out an arrangement with the Taliban after the Islamic insurgents seized power in Afghanistan on Aug. 15.
Sep 08, 2021 07:03 (IST)
US embarrassed by private sector Afghan evacuations
President Joe Biden has promised to do everything in his power to rescue Americans stranded in Afghanistan and fearful of violent Taliban reprisals following the US military withdrawal.
But limited resources and diminished political leverage have opened the way for evacuation missions led by Republican politicians, former military personnel and private organizations that risk embarrassing the White House, AFP reported.
Sep 08, 2021 06:24 (IST)
UN hopes to soon deliver aid to Afghanistan by land
The United Nations hopes to deliver aid to Afghanistan by land soon, a senior UN official said Tuesday, adding that a new representative of the global body was en route to the country.
"We would like to see the beginning of road travel in from other countries for supplies," said Martin Griffiths, the undersecretary general for humanitarian affairs and emergency relief coordinator.