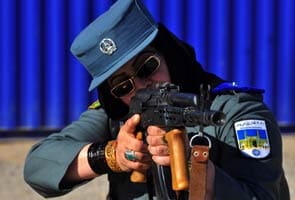 A policewoman at a Police Training Center (AFP file pic)

Kabul: An unpublished UN report on female police officers in Afghanistan found accounts of pervasive sexual assault and harassment by their male colleagues, according to Afghan and Western officials familiar with the report.

The report, which the United Nations has circulated only among senior Afghan officials at the Interior Ministry, found that about 90 percent of the policewomen interviewed described sexual harassment and sexual violence as a serious problem, and that about 70 percent of the policewomen said that they had personally experienced sexual harassment or sexual violence themselves, according to people who saw the report or had it described to them.

While a much smaller fraction reported either being raped or otherwise sexually assaulted, the overall picture was of a police force in which women were constantly at risk.

Although the report has not been made public and was not made available to The New York Times, two other recent reports touched on similar problems, though they did not focus as closely on the issue of sexual assault and harassment.

Ghulam Mujtaba Patang, who stepped down as interior minister in August, described the United Nations report's broad outlines, but questioned its findings. He said that after reading the report he sent a team to investigate the situation of female police officers and that none of the women his team spoke to complained of such mistreatment.

"If an Afghan policewoman is being raped or sexually harassed, they would report that - they wouldn't keep it secret," he said.

The chief spokesman for the Interior Ministry, Seddiq Seddiqi, said he thought the report had "some exaggeration of the issues and the problems."

Both men insisted, however, that the ministry was committed to improving the situation of policewomen.

The report, according to two people familiar with it, surveyed nearly 10 percent of the female police force. United Nations officials would not discuss its details.

"We are working with the ministry on follow-up to the report and to put in place improvements," said Georgette Gagnon, the U.N. director of human rights for Afghanistan.

Few subjects are as taboo in Afghanistan as sexual behavior, and the victims of sexual attacks are often accused of immorality, shunned and sometimes jailed.

Women's rights advocates said that because Afghan policewomen were afraid of being penalized for revealing the problem, it was extremely difficult to get them to talk about abuse. That is all the more true if the person committing the sexual abuse is their commander or one of his close friends on the police force.

The women interviewed by The New York Times said they feared being fired or demoted, or being sent to work in a job that was far away from their home if they complained.

Most policewomen are low-level security screeners at checkpoints or government buildings, and in many instances they are the only person earning money in the family and desperately need their salaries - usually around $240 per month.

A further disincentive to talking publicly about sexual abuse or coercion is that many Afghans already believe female police officers have loose morals simply because they are willing to work in public with men who are not relatives. If a woman admits that she is under pressure to have sex, conservative  relatives might force her to quit - or even kill her to expiate the perceived dishonor to the family.

Patang said he had visited policewomen in all of the provinces and had never heard a complaint about sexual abuse. Most mentioned discontent with salaries or a lack of promotions, he said.

"I think the reason they told these things to the U.N. and did not mention it to my inquiry was that these were mainly illiterate women who thought they might gain more attention and support by making these claims," he said.

The situation for female police officers is made more difficult because there are so few of them - barely 1 percent of the roughly 155,000-member force.

A policewoman from eastern Afghanistan who spoke on condition of anonymity said she was the only female of more than 20 people working at her checkpoint. "I have asked to move, the men are not good there," she said.

"They were making bad cheap jokes every time I came in, and one man was leering at me every day saying, 'Talk to me, be with me.' What should I do?" she said.

Though they questioned the scope of the report's findings, Interior Ministry officials said they were trying to improve conditions for female officers.

"We are currently working seriously to make sure that the women are happy and women have the best environment to serve their country," said Seddiqi, adding that the new minister, Umar Daudzai, wants to recruit 10,000 policewomen by the end of 2014. In addition, the ministry will strive to increase public awareness of the role of female police officers, Seddiqi said.

The recruitment goal, while lauded by some, is in many ways a distraction from the problem. Even reaching the current goal of 5,000 policewomen by 2015 is behind schedule, according to ministry officials. The latest biannual report to Congress by the Pentagon acknowledged that women's recruitment "will remain a serious challenge."

Senior ministry officials understand that one way to decrease the chance of sexual harassment and sexual violence is to have more female police officers so that it becomes more normal for them to work alongside men, Seddiqi said. Now a number of male commanders simply do not want to fill posts with women, according to the Pentagon report.

Yet, it is difficult to persuade women to join the police if they fear they will be at risk of harassment, violence or worse. In Helmand province, where there are at most 30 policewomen, three have been killed since the beginning of July, including their commander, who died Monday after being shot in the neck the day before.

The U.N. report is the third this year that examines the hardships faced by Afghan policewomen, including their vulnerability to sexual harassment.

The other reports were conducted by Human Rights Watch and Oxfam.

Promoted
Listen to the latest songs, only on JioSaavn.com
The Human Rights Watch report examined the lack of female toilets and designated changing rooms, which the report contended increased women's exposure to abuse.

The Oxfam report focused on the tiny number of female police officers, and emphasized that the absence of policewomen also harms Afghan women because they suffer from high rates of domestic violence. Afghan women would be more likely to discuss such violence with another woman, since they fear that a man might not believe them or, worse, return them to the family where the abuse took place.
© 2013, The New York Times News Service
Comments
Afghanistan