"Acts Of Genocide" Suspected Against Rohingya In Myanmar: UN 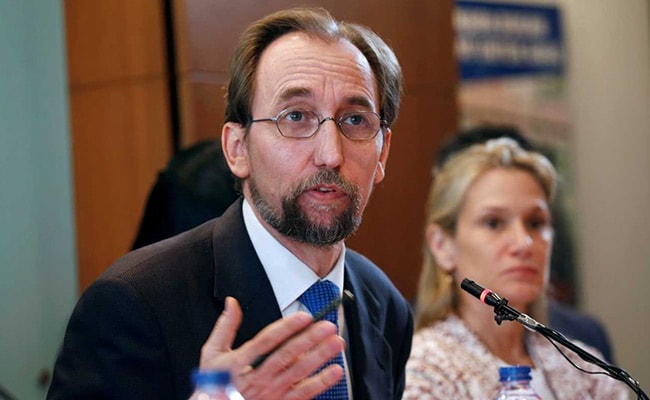 Geneva: The United Nations human rights chief said on Wednesday that he strongly suspected that "acts of genocide" may have taken place against Muslim Rohingyas in Myanmar's northern Rakhine state since August.

Reports of bulldozing of alleged mass graves showed a "deliberate attempt by the authorities to destroy evidence of potential international crimes, including possible crimes against humanity," Zeid Ra'ad al-Hussein added in a speech to the U.N. Human Rights Council.

Nearly 700,000 Rohingya have fled Rakhine into Bangladesh since insurgent attacks sparked a security crackdown in August, joining 200,000 refugees from a previous exodus.

Zeid noted that his office said on Tuesday that it believes ethnic cleansing is still underway in Rakhine.

Rohingya are still fleeing because of "systematic" if lower-intensity persecution and violence there, he said.

"Victims have reported killings, rape, torture and abductions by the security forces and local militia, as well as apparently deliberate attempts to force the Rohingya to leave the area through starvation, with officials blocking their access to crops and food supplies," Zeid told the Geneva forum.

"This Council is aware that my office has strong suspicions that acts of genocide may have taken place in Rakhine State since August," he added.

There was no immediate comment by the Myanmar government. In the Council, its delegation is allowed to respond on Thursday.

His office had received reports of land inhabited by Rohingya being appropriated and members of other ethnic groups replacing them.

"A recent announcement that seven soldiers and three police officers will be brought to justice for the alleged extra-judicial killing of ten Rohingya men is grossly insufficient," he added.

Myanmar's government must take steps to provide real accountability for violations and respect the rights of Rohingya, including to citizenship, Zeid said.

A fact-finding mission set up by the Council, headed by former Indonesian Attorney-General Marzuki Darusman, is due to report on its initial findings on Monday after interviewing victims and survivors in Bangladesh and other countries.

Promoted
Listen to the latest songs, only on JioSaavn.com
Pending their final report, the U.N. General Assembly should establish a new independent mechanism to expedite criminal proceedings in courts against those responsible, Zeid said.
© Thomson Reuters 2018

(This story has not been edited by NDTV staff and is auto-generated from a syndicated feed.)
Comments
RohingyaMyanmarRakhine