Mr Gere boarded the Open Arms, which had over 100 migrants stuck on board, to keep a spotlight on their situation as they wait for European nations to agree to take them in. 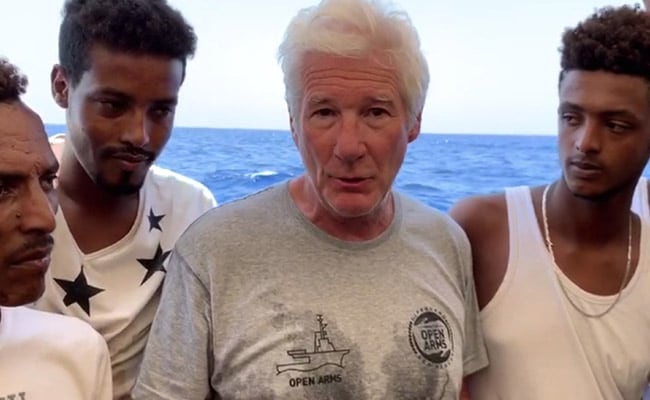 Richard Gere boarded the Open Arms, which had over 100 migrants stuck on board

On board the Ocean Viking:

The Ocean Viking charity ship plucked 85 African migrants from the sea off Libya on Friday, the latest rescue in the Mediterranean as Hollywood star Richard Gere boarded a second vessel to highlight the plight of those stranded.

Mr Gere boarded the Open Arms, which had over 100 migrants stuck on board, to keep a spotlight on their situation as they wait for European nations to agree to take them in.

The Ocean Viking, operated by French NGOs SOS Mediterranee and Doctors without Borders (MSF), had to call off its initial search during the night and had to wait till dawn broke to finally find the migrant boat -- to applause from the passengers.

After setting off from Libya, they had been spotted on Thursday evening from a plane flying in the European Union's migrant monitoring operation Sophia.

They had come from Senegal, Mali, Ivory Coast and Sudan. Among them are five women and 15 children, the youngest aged just one.

"It was the start of our third day at sea," said a young woman as she clambered aboard Ocean Viking.

Crew members continued to scan the waves for a second vessel that set sail at the same time.

On Friday night, 39 migrants were rescued in international waters, Open Arms founder Oscar Camps tweeted, adding to the 121 already on the vessel.

In Italy, Interior Minister Matteo Salvini fired off a warning to Oslo, where the rescue ship is registered.

"Italy is not legally bound, nor disposed to taken in clandestine, unidentified migrants from on board the Ocean Viking," he wrote.

He has said the same this week about the migrants on Open Arms, operated by Spanish charity Proactiva.

Norway's minister of justice and immigration, Joran Kallmyr, said on public television that the migrants should be "transported back to Africa, either to Tunisia or Libya. They should not be sent to Europe because then this action will be an extension of the refugee route instead of a rescue operation".

Mr Gere, who boarded the Open Arms on Friday, said he had just arrived from the nearby Italian island of Lampedusa.

"We brought as much water and as much food as we possibly can, for everybody on board," he said.

"Everyone is doing OK now but they were on two boats on the ocean. One of the boats was turned back by the Libyan navy. We don't know what happened to them.

Mr Salvini also commented on the American movie star saying he hopes Gere "gets a bit of a suntan" and that he should take the migrants to Ibiza, a Spanish resort island.

'We were there for them'
European parliament speaker David Sassoli, an Italian, on Thursday wrote to EU Commission President Jean-Claude Juncker urging immediate aide for the migrants and a quick deal between the member states to take them in.

A commission spokesperson admitted Friday that no mediation effort was under way in Brussels to allow the Open Arms group to disembark on dry land in Europe.

States had been asked "to show solidarity and to contribute to finding a solution for the persons on board".

France announced on July 22 that 14 EU states had agreed on a "solidarity mechanism" to share out migrants saved on the Mediterranean, so long as they were allowed to disembark in Italy.

Meanwhile, Proactiva Open Arms loaded supplies onto its yacht Astral, which was to set sail from Barcelona on Friday evening and reach the charity's ship off Italy some three days later.

On the Ocean Viking, migrants were being settled in for a lengthy stay.

Survival kits from MSF were handed out to each person before they were shown to sleeping quarters in containers lined up on deck.

The container walls have been painted with animals and other motifs.

"When they saw that, many broke into a smile," said an MSF staffer on board.