A sinkhole has grown into a 220-foot depression in the Land O' Lakes neighborhood near Tampa, swallowing two homes and prompting authorities to evacuate others. 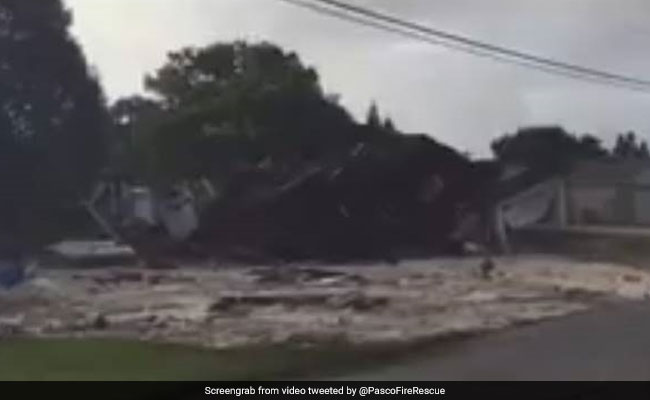 A massive sinkhole has swallowed two homes in a neighborhood in western Florida and is still continuing to swell, prompting authorities to evacuate numerous nearby houses as a precaution, officials said.

The sinkhole started Friday morning as a small depression and grew into a 220-foot crater in the Land O' Lakes community near Tampa, authorities said.

Video from the scene shows a house crumbling to the ground as sirens wail in the background. Authorities said there have been no reported injuries.

"This is an active sinkhole. It's still growing," Tambrey Laine, a public information officer for Pasco County, told The Washington Post on Friday afternoon.

Firefighters responded about 7:30 a.m. to a report about a depression beneath a boat and, when they arrived, found that "the depression had actually already taken the boat and was starting to move into the direction of the house," Kevin Guthrie, assistant county administrator for public safety for Pasco County, told reporters during a morning news conference, according to NBC affiliate WFLA.

Whited said the residents were not there at the time but firefighters rescued two dogs from the home on Ocean Pines Drive. "We got as much as we could as quickly as we could before it got too dangerous to be up there," he said, adding: "For the most part, they've lost everything."

By 9:30 a.m., authorities said, the sinkhole had destroyed the home and had spread to another home next door. State geologists said it is a matter of time until a swimming pool behind the second home sinks into the ground.

Authorities said they voluntarily evacuated 11 residences in the area.

PCFR crews are on scene of a confirmed sink hole in a Land O Lakes neighborhood. Please avoid the area. . . .

Guthrie, the assistant county administrator for public safety, said that the sinkhole opened up where a previous sinkhole had been stabilized in the past. The Tampa Bay Times reported Guthrie said the foundation had been reinforced with steel pins about five years ago.

He told reporters that geologists from the state Department of Environmental Protection have verified that the current sinkhole is active and progressing, and have asked people to maintain a 200- to 300-foot perimeter.

Guthrie said there are theories that the sinkhole may eventually merge with a nearby lake, which was about 200 feet away by early Friday afternoon.

(This story has not been edited by NDTV staff and is auto-generated from a syndicated feed.)
Comments
Land O' Lakessinkhole in floridaTampa