A Year After Attack, France's Jews Learn To Live Under Armed Guard 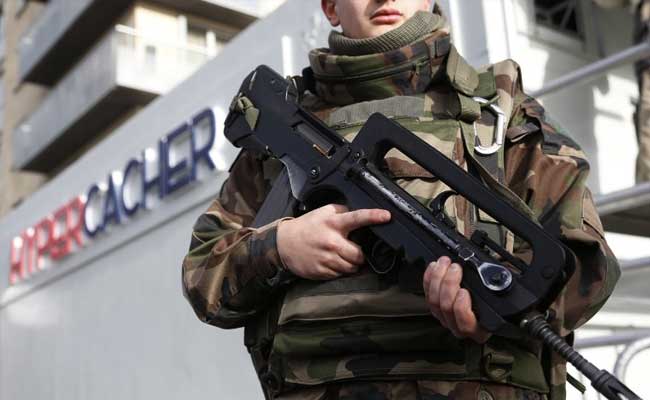 A French soldier stands guard during the posing of a commemorative plaque on the Hyper Cacher Jewish supermarket in Paris on January 4, 2016. (AFP Photo)

Paris: Ever since a jihadist attack on a kosher store left four people dead a year ago, France's Jews have grown used to soldiers patrolling their neighbourhoods and schools.

While a comfort to some, the fact that the large Jewish community is forced to live under armed guard only heightens the sense of being a target.

"I don't feel safe here anymore. As Jews we are a preferred target, in a country which itself is a target" of jihadists, said Noemie, 27, who escaped the bloody hostage drama.

Paris was shaken and on edge two days after 12 people were gunned down at the Charlie Hebdo satirical weekly when Noemie went to the Hyper Cacher supermarket on January 9 to buy some groceries for her grandmother.

It was a day of high drama.

Said and Cherif Kouachi, the two brothers who waged the Charlie Hebdo attack, were under police siege in a small town near Paris where they had taken a hostage after two days on the run.

Then, in the early afternoon, a gunman burst into the Jewish supermarket on the eastern edge of the French capital and opened fire.

The man was identified as Amedy Coulibaly, who phoned a French television station and said he was carrying out the attack in the name of the Islamic State extremist group.

He said he had coordinated his atrocities with Cherif Kouachi, who himself had said he was backed and financed by al-Qaeda in Yemen.

Coulibaly threatened to kill all the hostages inside the supermarket if police launched an assault on the Kouachi brothers.

At around 5:00 pm, French commandos launched an assault on the building where the Kouachi brothers were holed up, killing both suspects.

Then, 15 minutes later as Coulibaly knelt for his evening prayers on the other side of the city, commandos launched their assault on the Jewish supermarket, killing the jihadist.

It was later revealed that police were able to track his actions as he did not hang up the phone properly after talking to reporters at the French TV station BFMTV.

Coulibaly was later found to have killed a policewoman a day earlier when he was involved in a car accident, and also shot and injured a jogger.

A year later the Hyper Cacher has been fully renovated, and its clients have returned.

"It took me six months to be able to come back," said Samuel, 24, a regular at the kosher store.

"There has been a real breaking point. Now we know we can be killed while doing our grocery shopping, or walking in the street," he told AFP.

Two days after the attack, on January 11, leaders from across the globe gathered in Paris to head a march of 1.6 million people united against terrorism.

For France's 500,000-strong Jewish community it was a long-awaited show of solidarity after years of rising anti-Semitism in the country.

According to French government statistics, anti-Semitic acts have soared in recent years, with the number reported between January and May 2015 increasing 84 percent compared with the same period in 2014.

The growing insecurity has also pushed many to make "aliyah" and emigrate to Israel, with record departures in 2015 of 7,900 people, according to official figures.

Israeli Prime Minister Benjamin Netanyahu came under fire for urging French Jews to move to the Jewish state after the Hyper Cacher attack.

"All Jews who want to immigrate to Israel will be welcomed here warmly and with open arms.

While personal religious reasons also push Jews to make the move to Israel, government has sought to reassure its Jewish community and urge them to stay.

"France, without its Jews, is not France," said Prime Minister Manuel Valls.

To reassure the community, 700 soldiers have been deployed to patrol outside synagogues, schools and community centres.

At the Hyper Cacher, a year on from the attack, some regulars say they just want to "get on with their lives."

"We think before coming, but when we see the security we feel more or less protected," said Deborah, 29.