A Texas Boy Found A Rattlesnake In A Toilet. Then A Snake Catcher Found 23 More. 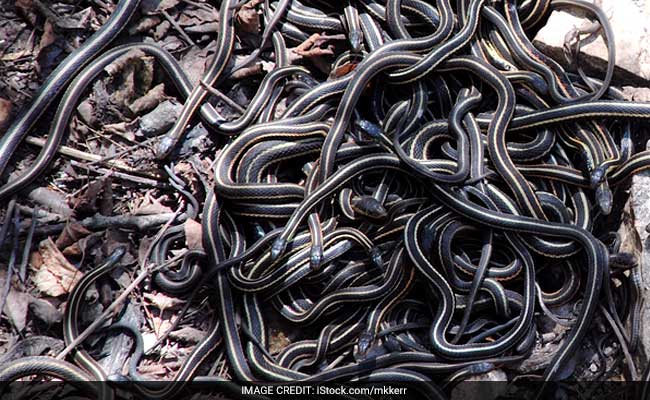 In total, 24 western diamondback rattlesnakes were located at the family's property (Representational)

Jason McFadden was at work one morning in late January when he got a text message from his wife, Cassie.

That text was followed by a picture - of a rattlesnake inside a toilet at their Texas home.

"Like everybody else," Jason McFadden said, "my jaw dropped."

McFadden said he recognized the snake was a threat, and told his wife to kill it. She grabbed a broom, he said, in an attempt to block it in the toilet. The snake, which had first been spotted by the couple's young son, pushed its way out anyway, and slithered onto the floor.

Sparing you the details . . . rest in peace, toilet snake, which was no match for what came next. There was a garden hoe, a shovel and branch cutters involved. You can get the picture.

McFadden went home to make sure everything was okay. And when he returned to his job, he also went ahead and tracked down a local snake removal company, to swing by the home.

That, in a nutshell, is how the McFadden family discovered that there were more snakes around.

In total, 24 western diamondback rattlesnakes were located at the family's property, including the one in the toilet, according to a Facebook post from Big Country Snake Removal.

Thirteen adult rattlesnakes were removed from a storm cellar at the McFadden home, according to the Facebook post. Another 10 were removed from under the house. Five of the snakes at the property were babies. The family, the post said, had "no idea."

"How is this possible?" the Facebook post states. "It's actually quite simple; rattlesnake are secretive and can be very cryptic - They rely heavily on their camouflage. This is simply how they survive. Just because you don't see them doesn't mean they aren't there. . .."

The snake in the toilet was initially discovered by the couple's young son, Isaac McFadden, 4. Isaac only saw the head at first, and tried to flush it, said his father.

"And it kept coming up," McFadden said.

So Isaac told his mother, said Jason McFadden, who was a little skeptical.

"Because we have stuffed animal snakes and toy snakes," he said. "You know, kids, they do stuff."

When another son yelled out about it, this time with more alarm in his voice, McFadden said his wife knew something was wrong.

"It was very surprising," Jason McFadden said of the discovery. "Kind of gut-wrenching, a little bit, just to know that many snakes were living right under our feet and we didn't even know it. Literally."

The snakes were corralled by Nathan Hawkins, of Big Country Snake Removal. With the exception of the one found in toilet, which was killed, they were released in an undisclosed location, he said.

Hawkins is a fan of snakes, and thinks they get a bad rap. With a little bit of understanding and knowledge, Hawkins said, they might not seem so scary.

"The fear that is associated with snakes is . . . irrational," he said, "it's an irrational fear."

In the United States, about 7,000 people are bitten by venomous snakes each year, according to the Texas Department of State Health Services. Only about 0.2 percent of venomous snake bites end in death.

"On average, 1 to 2 people in Texas die each year from venomous snake bites," the website states.

In 2001, four people died from lightning in Texas, the Texas Parks & Wildlife Department website notes. One person died after a snakebite.

A 6-year-old boy in Texas suffered a rattlesnake bite last April, an injury that reportedly left him hospitalized with an infection. A teenager in 2014 was reportedly bitten by a western diamondback rattlesnake and wrapped his headphone cords like a tourniquet, in an attempt to stop the venom from spreading.

This was the first time Hawkins had been part of a snake-in-the-toilet situation in person, but it really is something that can happen. Country music singer Brett Eldredge, for example, once found one in a toilet in the Bahamas.

If a homeowner has a snake issue, it's generally because those snakes are looking for rodents or shelter, Hawkins said. He pointed out that Western diamondback rattlesnakes are "fairly communal," so if you can find one, you'll probably find others.

Promoted
Listen to the latest songs, only on JioSaavn.com
"They're just - they're unique," Hawkins said of snakes. "There's nothing else on the planet like them."

(This story has not been edited by NDTV staff and is auto-generated from a syndicated feed.)
Comments
RattlesnakeSnake catchersnakes in toiletdiamondback rattlesnakes