Now, investigators believe they have discovered the "smoking gun" that would support a decades-old theory that Earhart and her navigator, Fred Noonan, were captured by the Japanese. 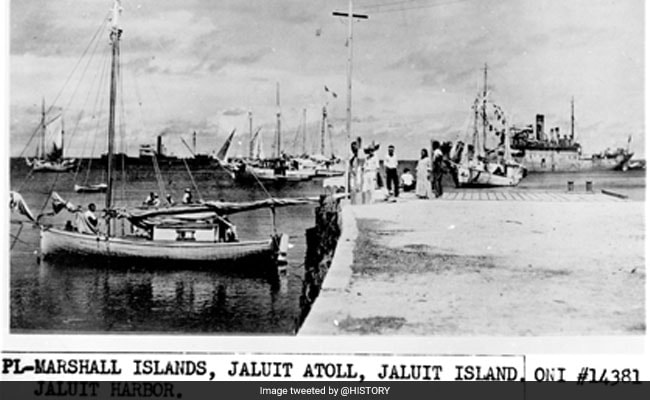 What happened to Amelia Earhart?

That question has captivated the public ever since her plane vanished over the Pacific Ocean in 1937 as she attempted to become the first female pilot to fly around the world.

Now, investigators believe they have discovered the "smoking gun" that would support a decades-old theory that Earhart and her navigator, Fred Noonan, were captured by the Japanese: a newly unearthed photograph from the National Archives that purportedly shows Earhart and Noonan - and their plane - on an atoll in the Marshall Islands.

"I was originally skeptical until we could get the photograph authenticated," Shawn Henry, a former FBI assistant executive director who is now helping privately investigate the Earhart disappearance, told The Washington Post. "The fact that it came out of the National Archives as opposed to somebody's basement or garage somewhere - that to me gave it a lot more credibility."

The photograph was rediscovered a few years ago in a mislabeled file at the National Archives by a former U.S. Treasury agent named Les Kinney, who began looking into Earhart's disappearance after he retired, according to previews for a new History channel documentary, "Amelia Earhart: The Lost Evidence," that airs July 9.

The 8-by-10-inch black-and-white photograph went ignored in a stack of 20 or 30 other pictures until Kinney took a closer look a few months later, Henry said.

In the photo, a figure with Earhart's haircut and approximate body type sits on the dock, facing away from the camera, Henry points out. Toward the left of the dock is a man they believe is Noonan. On the far right of the photo is a barge with an airplane on it, supposedly Earhart's.


Henry, who was asked to join the investigation about a year ago, said two different photo experts analyzed the picture to ensure it had not been manipulated. It had not been, they found. The experts also compared the facial features and body proportions of the two figures in the photograph with known pictures of Earhart and Noonan.

For the man on the left, "the hairline is the most distinctive characteristic," Ken Gibson, a facial recognition expert who studied the image, told the Today show. "It's a very sharp receding hairline. The nose is very prominent. . . . It's my feeling that this is very convincing evidence that this is probably Noonan."

The figure seated on the dock is wearing pants, much like Earhart often did, Henry noted.

"I'm looking at her sitting on the dock and thinking, 'This is her,' " he said.

Though they can't be sure of when the photo was taken, there is no record of Earhart being in the Marshall Islands, he added.

Henry said he traveled to the Marshall Islands and interviewed the son of a man whose father repeatedly told others he had witnessed Earhart's plane land at Mili Atoll in 1937. He also spoke with the last living person who claimed to have seen the pair after their emergency landing.

"But again, for me, those things are all somewhat suspect until you have that photograph, which corroborates that she was there," Henry said. "To me, that's just proof beyond a reasonable doubt."

Gary Tarpinian, executive producer of the History documentary, told the Today show that they believe the Koshu, the Japanese merchant ship in the photo, took Earhart to Saipan, where she died in Japanese custody.

The team thinks the photo may have been taken by someone spying on the Japanese, he added. Other questions, like when and how Earhart died, remain a mystery.

"What happened to her then? Was there a coverup or not? Did the U.S. government know? What did the Japanese government know?" Henry said. "I think this actually opens up a whole new line of questioning."

Over the past 80 years, three prevailing theories about Earhart's disappearance have emerged.

Some speculate that Earhart's Lockheed Model 10 Electra crashed and sank to the bottom of the Pacific Ocean, killing her and Noonan.

Last year, a Pennsylvania-based group called International Group for Historic Aircraft Recovery (TIGHAR) repositioned the spotlight on an alternate theory: With their fuel rapidly depleting, Earhart and Noonan used celestial navigation to land on a remote coral atoll named Gardner Island, about 400 miles south of Howland Island, their original destination. It was there, TIGHAR says, that the two tried to send out frantic radio calls for help but eventually died as castaways.

Just last month, the group launched an ambitious expedition to try to prove its theory, sending researchers and a pack of forensically trained border collies to Gardner Island, now called Nikumaroro. The mission: For the dogs to sniff out human bones that, through DNA matching, would confirm Earhart and Noonan landed and then perished on that island.

Henry said he isn't bothered by other explanations for of Earhart's disappearance.

"I've listened to some competing theories," he said. "When you look at the totality of what we put together and then hold that photograph . . . I think that photograph is as close to a smoking gun as you're going to have in a cold case that's 80 years old."

(This story has not been edited by NDTV staff and is auto-generated from a syndicated feed.)
Comments
Amelia EarhartFred Noonan