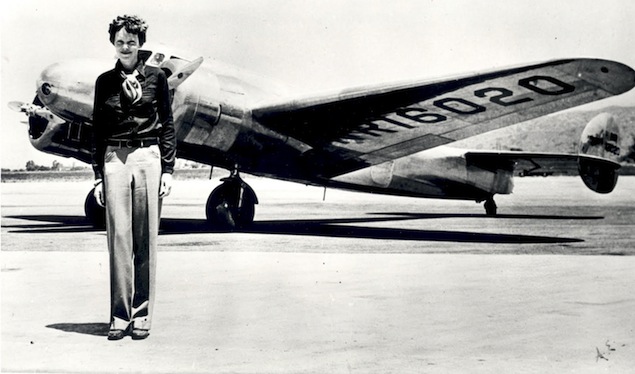 Amelia Earhart's story is revolutionary: She was the first woman to fly alone across the Atlantic Ocean, and might have been the first to fly around the world had her plane not vanished over the Pacific Ocean in 1937.

After decades of mystery surrounding her disappearance, her story might come to a close.

A new scientific study claims that bones found in 1940 on the Pacific Island of Nikumaroro belong to Earhart, despite a forensic analysis of the remains conducted in 1941 that linked the bones to a male. The bones, revisited in the study "Amelia Earhart and the Nikumaroro Bones" by University of Tennessee professor Richard Jantz, were discarded. For decades they have remained an enigma, as some have speculated that Earhart died a castaway on the island after her plane crashed.

The bones were uncovered by a British expedition exploring the island for settlement after they came upon a human skull, according to the study. The expedition's officer ordered a more thorough search of the area, which resulted in the discovery of several other bones and part of what appeared to be a woman's shoe. Other items found included a box made to hold a Brandis Navy Surveying Sextant that had been manufactured around 1918 and a bottle of Benedictine, an herbal liqueur.

"There was suspicion at the time that the bones could be the remains of Amelia Earhart," Jantaz wrote in the study.

When the 13 bones were shipped to Fiji and studied by Dr. D. W. Hoodless of the Central Medical School the following year, Jantz argues that it is likely that forensic osteology - the study of bones - was still in its early stages, which therefore affected his assessment of which sex the remains belonged to. Jantz, in attempting to compare the lost bones with Earhart's bones, co-developed a computer program that estimated sex and ancestry using skeletal measurements. The program, Fordisc, is commonly used by forensic anthropologists across the globe.

Jantz compared the lengths of the bones to Earhart's measurements, using her height, weight, body build, limb lengths and proportions, based on photographs and information found on her pilot's and driver's licenses. His findings revealed that Earhart's bones were "more similar to the Nikumaroro bones than 99 [percent] of individuals in a large reference sample."

"In the case of the Nikumaroro bones, the only documented person to whom they may belong is Amelia Earhart," Jantz wrote in the study.

Earhart's disappearance has long captivated the public, and theories involving her landing on Nikumaroro have emerged in recent years. Retired journalist Mike Campbell, who authored "Amelia Earhart: The Truth at Last," has maintained with others that Earhart and her navigator, Fred Noonan, were captured in the Marshall Islands by the Japanese, who thought they were American spies. He believes they were tortured and died in custody.

But Ric Gillespie, director of the International Group for Historic Aircraft Recovery (TIGHAR) spoke to The Washington Post's Cleve R. Wootson Jr. in 2016 about how he too believes the bones found on Nikumaroro belong to Earhart.

In 1998, the group took Hoodless' measurements of the Nikumaroro bones and analyzed them through a robust anthropological database. They determined the bones belonged to a taller-than-average woman of European descent - perhaps Earhart, who at 5 feet 7 to 5 feet 8, was several inches taller than the average woman.

In 2016, the group brought the measurements to Jeff Glickman, a forensic examiner, who located a photo of Earhart from Lockheed Aircraft Corp. that showed her with her arms exposed. It appeared, based on educated guesses, that Earhart's upper arm bone corresponded with one of the Nikumaroro bones.

Glickman, who is now a member of TIGHAR, told The Washington Post at the time that he understands some might be skeptical about his findings, as they were based 76-year-old medical notes. But the research made clear, he said, that Earhart died on Nikumaroro.

Both Gillespie and Glickman could not be immediately reached by The Post for comment on Jantz's findings.

In June 2017, researchers traveled to Nikumaroro with dogs who had been specially trained to sniff the chemicals left behind by decaying human remains. They thought they might discover a bone, and were especially hopeful when the dogs seemed to detect the scent of human remains beneath a ren tree. But there were no bones.

A week later, the History Channel published a photo suggesting Earhart died in Japan. Based on a photograph unearthed from the National Archives, researchers said Earhart may have been captured by the Japanese after all, as the photo showed Earhart and Noonan, in Jaluit Harbor in the Marshall Islands after their disappearance.

In the photo, according to The Post's Amy B Wang, "a figure with Earhart's haircut and approximate body type sits on the dock, facing away from the camera. . . . Toward the left of the dock is a man they believe is Noonan. On the far right of the photo is a barge with an airplane on it, supposedly Earhart's."

After the History Channel program aired, a Japanese-military-history blogger matched the photo to one first published in a 1935 Japanese travelogue, two years before Earhart and Noonan disappeared.

The History Channel released a statement addressing the discrepancy.

"HISTORY has a team of investigators exploring the latest developments about Amelia Earhart and we will be transparent in our findings," the statement read. "Ultimately, historical accuracy is most important to us and our viewers."

Promoted
Listen to the latest songs, only on JioSaavn.com
Gillespie still stands by his theory, he told Wootson in 2017 after the photograph's discovery. His group, TIGHAR, has tried to debunk thephoto, and Gillespie still thinks the "overwhelming weight of the evidence" points to Nikumororo.

(This story has not been edited by NDTV staff and is auto-generated from a syndicated feed.)
Comments
Amelia EarhartNikumaroroAmelia Earhart Bones