A Lifelong Eclipse Chaser's Promise To America: 'You Will Never Be The Same'

The August 21 total solar eclipse will be a spectacle like nothing most people have seen. Mike Kentrianakis has witnessed 20 solar eclipses in his 52 years.

New York: He approaches the first stranger with an expectant smile and an urgent query: "Do you know about the solar eclipse?"

The man shakes his head, and Mike Kentrianakis is launched. He's here at the Hayden Planetarium as an emissary of the American Astronomical Society, and his mission is to spread the word: On Aug. 21, the moon will pass between the sun and Earth, casting a shadow across a swath of the United States. The spectacle will be like nothing most people have ever seen.

Carmen Irizarry, a science teacher from Staten Island, walks over with her two young granddaughters. She's been thinking about taking them to a spot on the path of totality - where the moon will completely block out the sun for a few mesmerizing minutes. "I entirely encourage it," Kentrianakis tells her. "It's a completely different phenomenon. It shouldn't even be called an eclipse. It should be called something else." 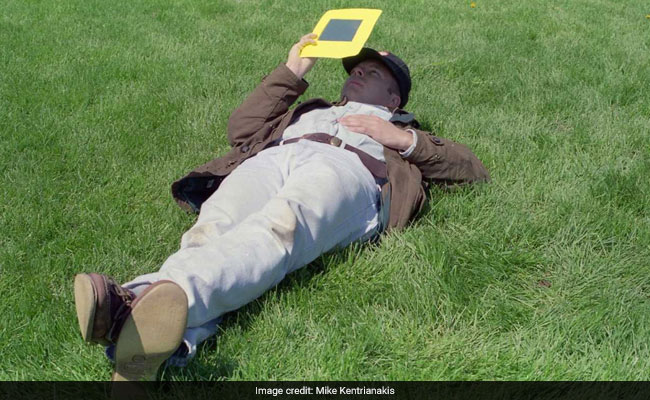 Mike Kentrianakis is looking forward to the August 21 eclipse

Kentrianakis would know. He has witnessed 20 solar eclipses in his 52 years, missing work, straining relationships and spending most of his life's savings to chase the moon's shadow across the globe. The pursuit has taken him to a mountaintop in Argentina, a jungle in Gabon, an ice field north of the Arctic Circle - exposing him to every type of eclipse there is to see, on every continent except Antarctica. Last year he watched one from an airplane 36,000 feet above the Pacific Ocean. The video of his rapturous reaction went viral, cementing his status as a "crazy eclipse guy," as he jokingly calls himself. "Oh, my God," Kentrianakis exclaims 21 times in the 3 1/2-minute clip. "Totality! Totality! Whooo, yeah!"

But it's the Aug. 21 eclipse, the first in a century to cross the entire continental United States, that Kentrianakis has been looking forward to for a lifetime. As the moon races in its orbit around Earth, it will briefly pass between our planet and the sun, completely blocking out the sunlight for people standing in its 70-mile-wide shadow. Over the course of an hour and a half, that shadow will follow the moon's path across the continent, beginning off the Oregon coast and sweeping down to South Carolina.

Finally, all of America will see what he has seen. Finally, "they're going to understand."

"If it strikes you hard enough," Kentrianakis says, "you will never be the same."

Kentrianakis was first struck on Feb. 26, 1979, in the middle of a snowy farm field in Manitoba. He was 14, and he'd been captivated by descriptions of eclipses in the college-level astronomy books he borrowed from the library. So when he heard that a team of New York scientists had a spare spot on an expedition to see the event from Canada, he begged his parents to lend him $400 for the trip.

"I'll pay you back with my paper route money," he promised. (He never did.)

When the sky began to darken, "it was something that I just absolutely didn't imagine," Kentrianakis says. The staid scientists let out almost animal yells of enthusiasm, cheering and laughing and narrating the three-minute event like sportscasters at a football game. Meanwhile, Kentrianakis stared in mute awe at the place where the sun should have been - now just a black hole in the sky.

"It didn't look like the pictures in the textbook," he recalls. "It was more than that. It was being in the shadow of the moon, and I couldn't quite comprehend the whole thing."

By the time he got back to Long Island, Kentrianakis was hooked. He subscribed to NASA's annual eclipse circulars. He bought huge sheets of silver solar screens that can be fitted onto telescopes and camera lenses to let the user take pictures of the sun. Though Kentrianakis became a TV news producer after college, not an astronomer, he became a fixture in the tightknit community of eclipse chasers who track the movements of the sun and moon with nearly religious fervor.

Their bible is NASA's massive 50-year Solar Eclipse Canon, a compendium of every eclipse the world will see for decades. Every 18 months or so, the orbits of the sun, moon and Earth align for a total solar eclipse. The moon - 400 times smaller than the sun but also 400 times closer - perfectly blocks the light of our star, casting part of Earth into shadow. In between those events are annular eclipses, which occur when the moon's orbit takes it slightly further away from Earth, so it can no longer completely cover the sun. Instead, a faint ring of light around the moon remains visible in a violet sky. A lunar eclipse happens when Earth passes between the sun and the moon, blocking out the sunlight we usually see reflected off the moon's rocky surface (the effect is less dramatic than an eclipse of the sun, so Kentrianakis doesn't chase after it).

All the information from the Canon is available online, but Kentrianakis still hauls around the copy he purchased in 1987.

"This is where I do all my planning for my lifetime," he says. It's where he first read about the eclipse that will cross the United States this year. Back then, August 2017 seemed so far away.

Now, Kentrianakis flips through the yellowed pages and reads out the date of every event he's witnessed.

May 30, 1984 - An annular eclipse that crossed over North Carolina. He persuaded two college friends to skip school and drive 10 hours south watch it with him.

May 10, 1994 - Another annular eclipse over Niagara Falls. He almost missed it, because he forgot that the spray from the falls would generate fog.

July 11, 2010. That was the eclipse over Easter Island, the one for which hotel room rates were so high that there was no way Kentrianakis could afford it. Instead, he considered attempting a trip to Argentina, where experts predicted there was a 5 percent chance of clear skies. His wife at the time, Olga, urged him not to go - it's not worth the expense, she insisted. Reluctantly, Kentrianakis stayed home.

"It was the beginning of the end for us," Kentrianakis says. There were problems in the marriage before that episode, "but it affected me that I felt that she didn't really appreciate what I loved." They were divorced the following year.

Kentrianakis doesn't like to dwell on this, or the other things he's given up to chase eclipses. He knows his bosses grumbled about the missed days of work. Friends raise their eyebrows at the extremes to which he goes. He's unwilling to admit how much he's spent on his obsession.

"There is a trade-off for everything, for what somebody wants," he says.

And Kentrianakis believes he's gained more than he's lost. Take the eclipse on March 20, 2015, which skimmed across the Arctic Circle over Svalbard, Norway. Just six months before, Kentrianakis suffered a stroke that left him using a wheelchair, and he had resigned himself to missing the solar event.

But then a friend from the eclipse chaser community offered to accompany him on the trip, pushing his wheelchair and carrying his luggage. Others extended financial support while Kentrianakis was unemployed.

"I was so flabbergasted. I couldn't believe it. . . . It was so encouraging," he recalls. Watching the sun vanish above the bleak Arctic wilderness, "I was just the most excited man in the world."

Kentrianakis's health has improved, but he didn't return to his old job. Instead, the American Astronomical Society now pays for him to do what once cost him a fortune: chase after the eclipse. This year he drove the entire 3,000-mile path of totality, handing out glasses and spreading the gospel. He even brought up the viral clip of himself "losing it" during that eclipse over the Pacific. Whatever it took to persuade listeners not to miss this phenomenon. (Kentrianakis is still figuring out his plans for the big day.)

"Some people are embarrassed to show their emotions and say what it's like or how they feel," he says. "But I have no embarrassment whatsoever."

Besides, "This year I will be vindicated," Kentrianakis insists. Come Aug. 21, the Internet will be flooded with videos of eclipse watchers in ecstasy. Few can witness such a spectacle and not be moved.

"It unlocks you," he says. "I don't know why. It is so visceral. It is the meaning of the word awe, awe-struck." And then he's off, waxing rhapsodic about the light, the symmetry, the electricity in the air, the feeling of cosmic insignificance. It takes him a few minutes to come back to Earth.

"I wish I could describe it in a normal fashion." He sighs. "If I could give the magic words . . . if I say the right thing, I can get them to go."

Promoted
Listen to the latest songs, only on JioSaavn.com
But all Kentrianakis can offer is his own fervor and this promise: "Wait till you see it. Then you will know."

(This story has not been edited by NDTV staff and is auto-generated from a syndicated feed.)
Comments
America's Greatest Eclipsesolar eclipse 2017solar eclipse in America