US President Donald Trump watched the partial eclipse from the White House. At one point, he was photographed looking up directly at the sun - a big no-no according to experts. Mr Trump later put on special protective glasses. 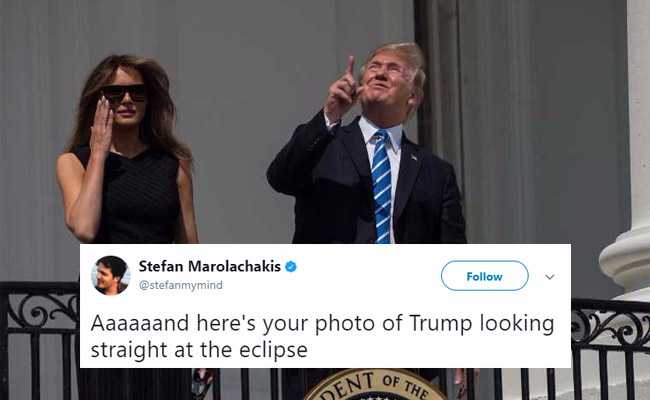 US President Donald Trump was photographed briefly looking up directly at the sun from the balcony of the White House during the partial solar eclipse on Monday. Thanks to Twitter, that moment instantly became a meme. Scientists had issued stern warnings that looking directly at the sun during the eclipse could result in permanent eye damage. According to reporters present at the White House, Mr Trump briefly squinted up at the sun, sans glasses, despite a shouted warning from an aide. His family, including First Lady Melania Trump and son Barron, were by his side looking up at the sky while wearing special protective glasses. Mr Trump was later photographed wearing the glasses as well.

Promoted
Listen to the latest songs, only on JioSaavn.com
The sun disappeared behind the moon in a rare total solar eclipse that was seen coast-to-coast across the United States for the first time in nearly a century on Monday. Washington DC, however, only witnessed a partial solar eclipse.

Aaaaaand here's your photo of Trump looking straight at the eclipse pic.twitter.com/5vv6sVTDIl

According to reporters, a White House aide standing beneath the balcony shouted, "Don't look."

As he did this, someone in a crowd of aides below shouted "Don't look." pic.twitter.com/dtfSLEzcAZ

Someone shouts "don't look" as Pres. Trump looks up without eclipse glasses on as solar eclipse passes over D.C. https://t.co/5ft70fm30Rpic.twitter.com/0lAkuzF9RZ

On Twitter, people weren't particularly surprised. Some, in fact, had predicted Mr Trump would do exactly that:

Literally everyone: please observe #SolarEclipse safely. do not stare into the sun directly, you WILL damage your eyes!!

It didn't take time for the moment to become a meme:

What doesn't kill you makes you stronger. #SolarEclipse2017pic.twitter.com/GKeTKjItjQ

Melania is me and Donald is my mom when we're in public and we see someone we know. pic.twitter.com/O9bwChGoKT

U had the moon and the sun, but there was shade from both sides, many sides folks, believe me.

Later, Mr Trump was photographed with the special viewing glasses on:

Exciting to watch the total eclipse with @potus today! #Eclipse2017pic.twitter.com/85Y8R4yJU7