A Floating Car Is Born From the Carnage of Japan's Tsunami

Hideo Tsurumaki, the former employee of a unit of Toyota Motor Corp. started to build a small, watertight electric vehicle that can float in floods, or even cruise at low speeds. 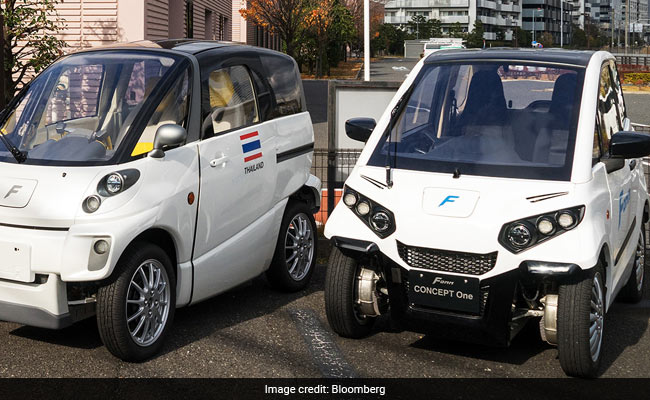 At best it is envisioned as a small electric vehicle. A second car for affluent families for short trips.

As the vehicles sank slowly into the sea, Tsurumaki thought about his mother, who lives by the ocean in another earthquake-prone part of the country. She has difficulty walking, like many of those who tried to flee by car that day. And he thought that if the cars had been able to float, fewer people would have perished.

Two years later, the former employee of a unit of Toyota Motor Corp. started to build a small, watertight electric vehicle that can float in floods, or even cruise at low speeds. His startup has some notable backers, a functioning prototype, and plans to produce 10,000 cars a year from late this year at a factory that it's renting near Bangkok in Thailand. By 2020, Tsurumaki hopes to take the company public.

"I intend to put one outside our house," Tsurumaki, 55, said of the cars. "Many others will probably think the same."

Vehicles that can travel on land or water have been around since at least the early 19th century, used by everyone from tour operators to armies. While Tsurumaki's invention may have been inspired by the tsunami, it falls short of a design needed to take on or survive the ferocity of the tidal waves or the might of strong flood currents. At best, he envisions it as a small electric vehicle - a second car for affluent families for short trips around the neighborhood.

Most customers will only use the floating capabilities in emergencies, probably only once in their lifetimes, he says.

Tsurumaki, a motorbike-racing enthusiast who only gave up on becoming a professional racer due to injury, left his post as lead engineer for an ultra-compact one-seater electric vehicle at Toyota Auto Body Co. in 2012. He founded Fomm Corp. with an initial capital of 200,000 yen ($1,804), and hand-built the first prototype while operating from a single-room dormitory. 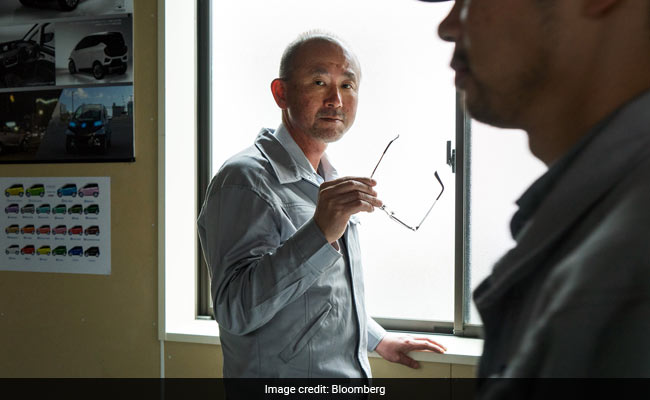 Hideo Tsurumaki started to build a watertight electric vehicle that can float in floods.

Tsurumaki worked for three years with University of Tokyo researchers on ways to drive the car in water with all tires submerged, eventually deciding to use turbine-shaped wheels that draw in water as they revolve, and a component at the front that releases the water to achieve propulsion. It also allows the vehicle to be turned using the steering wheel.

In 2016, Fomm formed a partnership with Trinex Assets Co., a Thai real estate company whose president also runs a car-parts maker, to help build the vehicle, which is now on its fourth prototype. Production is scheduled to start in December, with the car going on sale around the same time. Thailand, a major automaking hub, started favorable policies for plug-in vehicles and hybrids this year, including tax breaks for as long as eight years.

Tsurumaki has attracted some big-name Japanese investors. Yamada Denki Co., the largest home-appliances and consumer-electronics chain, formed a capital alliance in October, without disclosing the stake. It plans to sell the car. In November, he sealed a tieup with audiovisual equipment maker Funai Electronics Co., which will help produce the car in Japan.

Tsurumaki's electric city commuter, which is about the same size as a golf cart, features a lightweight body and batteries under each of its four seats. It accelerates by pulling a lever on the steering wheel, which is partly to save space. The batteries are replaceable, so users won't have to wait the six hours it takes for a full charge. The car will travel as much as 160 kilometers (99 miles) on one charge, with a top speed of 80 kilometers per hour.

"The car may serve as an upgrade for tricycles in Bangkok as the government pushes for cleaner vehicles, and it's just as easy to navigate as the tuk-tuks," said Ken Miyao, an analyst at consultancy Carnorama Inc. in Tokyo. "'I can see a reasonable chance for them to succeed."

While the startup has made progress, challenges still abound.

The biggest is costs. Electric vehicles are already expensive to produce, because of the high costs of parts such as batteries. The floating car will have additional expenses, such as for sealants to make it watertight.

Initially, Tsurumaki wanted to style its body like tough military vehicles, but the cost prompted him to give up on the idea. He settled on a design and materials that would just let it float.

The relatively small annual production target makes it harder to negotiate good deals with suppliers, according to Tsurumaki. That means the cars will sell for about 580,000 baht ($18,153), enough to buy a much bigger vehicle.

"It's a chicken-and-egg situation," he said.

Tsurumaki says he's looking to cut the price to less than $5,000 per car by sourcing mass-produced components at lower costs.

"They need to make cars as cheap as those without floating capabilities," he said. "I don't think anyone would want to pay twice as much just for this gimmick they may be able to use only once in their lifetimes at best."

(This story has not been edited by NDTV staff and is auto-generated from a syndicated feed.)
Comments
Hideo TsurumakiTsunami Floating Cars