A Father-Son Conversation After Paris Terror is Viral 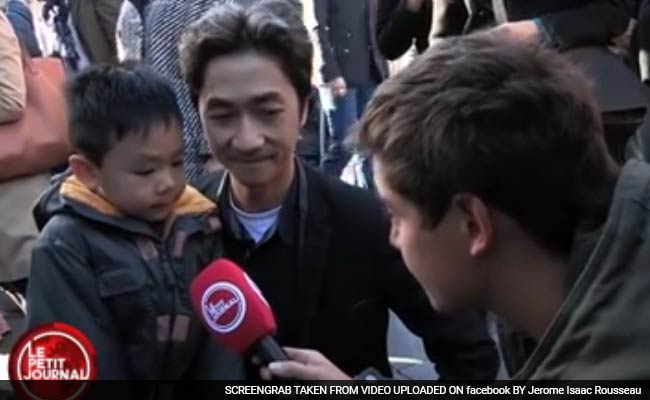 Facebook user Jerome Isaac Rousseau translated the video and shared what he called the "most precious conversation."

Paris: Near the Bataclan Theatre in Paris, where 89 concert-goers were killed in the Friday terror attacks, a little boy gets gentle reassurance from his father that terrorists 'have guns but we have flowers'.  "I feel better," the boy finally tells a French TV reporter who recorded the exchange.

Facebook user Jerome Isaac Rousseau translated the video and shared what he called the "most precious conversation." "They're my heroes. I feel better too now!", he says.

The conversation begins with the reporter asking the child, Brandon, sitting on his father's lap at the memorial site outside Bataclan, whether he understood what had happened. "Why did those people do that?"

The boy answers: "Because they're really, really mean. Bad guys are not very nice...And we have to be really careful because we have to change houses."

His father, Angel Le, cuts in to assure him: "Oh no don't worry...we don't need to move. France is our home."

The boy looks doubtful. "But there's bad guys papa...They have guns and they can shoot us."

His father points to the flowers at the memorial and explains in a soothing voice the power of peace.

Watch the video to see what finally brings a smile to the boy's face.