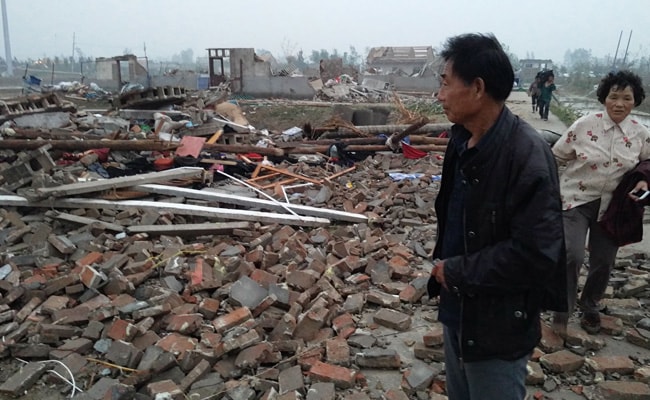 Residents look through the rubble of destroyed houses after a tornado in Yancheng, in China's Jiangsu province on June 23, 2016. (AFP Photo)

Beijing, China: Hurricane-force winds, freak hailstorms, pounding rain and a tornado killed 78 people in China's eastern province of Jiangsu on Thursday and injured nearly 500 others, 200 of them critically, Xinhua reported.

Winds of up to 125 kilometres (77 miles) per hour struck the city and outlying suburbs, destroying houses, according to the report.

"I heard the gales and ran upstairs to shut the windows," said Xie Litian, 62, from Donggou township in Funing County, told Xinhua.

"I had hardly reached the top of the stairs when I heard a boom and saw the entire wall with the windows on it torn away."

Saying that all the other houses in her neighbourhood had been destroyed, she added: "It was like the end of the world."

Many parts of China have been lashed by torrential rains this week as summer rainstorms have been heavier than usual, causing damage across the country.

Flooding is common during the summer monsoon season in the south of China but rainfall has been particularly heavy this year.

Eight people were trapped in a flooded coal mine in southwest China's Guizhou province, Xinhua reported.