575 Arrested As Hundreds Of Women Protest Immigration Policy In US

The protest was meant to demand the abolishment of ICE and the end of family detentions. 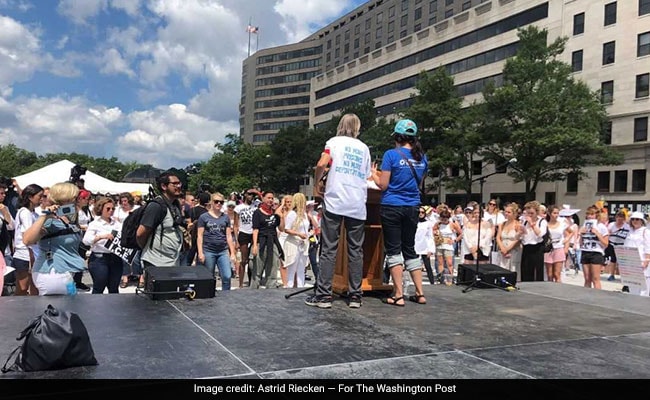 Hundreds of women gather on to march in protest of Trump's "zero tolerance" immigration policy.

They came from all over, took planes and buses from 47 states, slept at friends' homes or in churches and prepared to be arrested Thursday in Washington, D.C.

Most of the participants were white women, stumbling over the syllables of Spanish-language chants. Many had never faced arrest before. But here they were.

Capitol Police said 575 protesters were arrested and escorted out of the Hart Senate Office Building in a mass demonstration that called for the abolishment of the U.S. Immigration and Customs Enforcement agency, and an end to migrant family detentions and the Trump administration's "zero tolerance" immigration policy.

They were charged with unlawfully demonstrating, a misdemeanor.

"I have two kids, and as a white mother, there is almost no circumstance that they would be taken away from me - ever," said Victoria Farris, who slept Wednesday night in All Souls Church after participating in civil disobedience training. "I was awake one night because I couldn't sleep thinking about all those [immigrant] mothers and terrified children. I realized I had to do something more than protest, more than make a sign and march."

Protesters unfurled banners inside the Hart building Thursday as others staged a sit-in, wrapping themselves in shiny, silver space blankets. The political banners, which aren't allowed in the building's lobby, were confiscated by police.

Then the arrests began.

Just after 3 p.m., protesters were rounded up in groups of a dozen or more and led out of the building.

"Abolish ICE," they shouted as more were moved out. "Shut it down."

Demonstrators continued to sing and chant as they were led away. 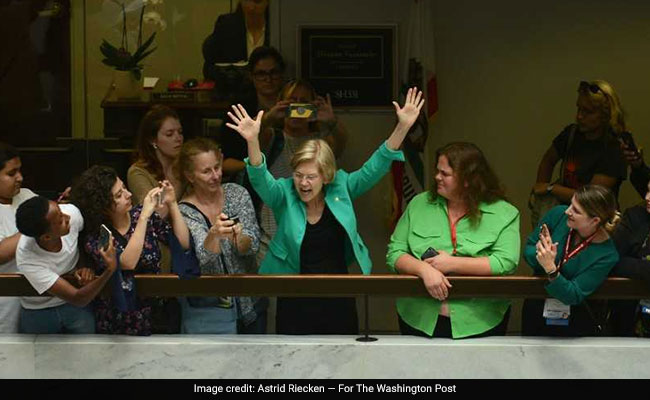 When the first group was escorted out of the building, the remaining crowd erupted in cheers.

"I join them in calling on the Trump administration to reunite these families and give these kids back to their parents," Duckworth said. "On my side of things, I ask my colleagues, let's pass, finally, sensible immigration reform."

Rep. Pramila Jayapal, D-Wash., joined in the protest and was led out with marchers by Capitol Police. Actress Susan Sarandon, who marched at the front as the protest made its way down Constitution Avenue, was arrested with a group of demonstrators.

It took about an hour to clear the women from the building.

The protest began hours earlier at Freedom Plaza, where hundreds of women robed in white and carrying signs deriding the Trump administration's immigration policy had gathered. The protest was organized by a coalition of groups, including the Women's March and the immigrant advocacy organization Casa de Maryland.

Several participants wrote "WE CARE" on their palms, a rebuke of the jacket first lady Melania Trump wore on her first trip to visit detained children near the border.

Ana Maria Archila, executive director of the Center for Popular Democracy, said calling for the disbandment of ICE "would have seemed absurd even a few months ago."

But now it is central to the mission of her group and Thursday's march.

"This country has finally been exposed to the brutality and inhumanity of immigration enforcement," she said. "This barrage of injustices has inspired us to say, 'No more. We will not be silent. We will not obey.' "

After gathering at Freedom Plaza, the group marched to the Justice Department before heading to the Hart building, singing hymns and protest songs all the way.

As they marched along Pennsylvania Avenue, past the Trump International Hotel, the crowd began to chant, "Shame," then burst into boos and demanded, "Where are the children?"

Approaching the Justice Department, the group fell silent, raising fists and hands in the air. Several federal workers on a lunch break wandered over to the fringe of the protest, taking pictures and clapping as the group of white-clad women walked on.

When they reached the front of the Justice Department, hundreds crowded the street and sat. Police cars blocked the area as officers allowed the sit-in to proceed. Several drivers who were able to squeeze by honked and gestured in solidarity. Demonstrators gather at Freedom Plaza before marching to the Justice Department and the Hart building.

In the Hart building, onlookers cheered as the women sang and chanted. Senate staff members in one office held a pink sign in the window: "Feminists are the majority."

The Trump administration's immigration crackdown hit resistance this week after the House rejected a border bill championed by the president, and a federal judge ordered the government to reunite immigrant families within a month.

But organizers said that has done little to abate national outrage. Thursday's march was one of several Washington, D.C., demonstrations this week to rebuke Trump's immigration policies.

On Wednesday, dozens of activists, including several who were recipients of the program known as Deferred Action for Childhood Arrivals (DACA), which gives temporary protection to immigrants illegally brought into the country as children, rallied outside the Washington headquarters of U.S. Immigration and Customs Enforcement and called for the organization's dissolution. They shouted at police and implored workers peering out the windows to "quit your job."

Thousands of demonstrators are expected to descend on Lafayette Square on Saturday in a protest calling for the end of family detentions and the return of the at least 2,500 children who were separated from their parents at the southern border. Organizers of the D.C. rally said similar protests will take place in 351 congressional districts across the country.