52 Killed in Pakistan in Suicide Attack at Wagah Border 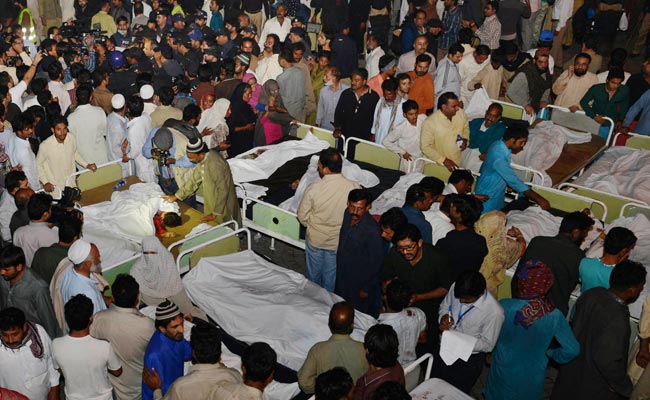 Relatives gather around the bodies of blast victims after a suicide bomb attack near the Wagah border on November 2. (Agence France-Presse)

Islamabad: Fifty-two people died and over 100 were injured in a suicide attack at the Wagah border in Lahore, Pakistan, minutes after the flag lowering ceremony on Sunday evening. (See photographs)

The bomber had been stopped at the gates of the parade ground, where people had gathered and then he detonated the bomb, reports news agency Press Trust of India, quoting Inspector General of Punjab Police Mushtaq Sukhera.

The casualties are mostly civilian - three Pakistani Ranger personnel have been killed and five have been injured. A family of eight is among the deceased. (See tweets)

The blast took place at 6:12 PM outside the parade ground near the Wagah border, 500 metres from the Indian side. Hundreds come to watch the ceremony at sunset and the victims, on Sunday, were on their way back when the attack took place.

Sources said there was an alert about a possible suicide attack 15 days ago, after which security was strengthened on both sides of the border. The Pakistan Rangers had put up extra barricades and stationed more personnel, as had the Border Security Force, which mans the Indian side of the border at Attari.

Sources in the BSF told NDTV that a communication from the Pakistan Rangers said the attack was earlier mistaken for a cylinder blast at a local restaurant.

Promoted
Listen to the latest songs, only on JioSaavn.com
The ceremony at the Wagah-Attari border is one of the longest in operation between India and Pakistan. It had continued largely untouched by the many ups and downs in the relationship between the two countries, including the recent ceasefire violations at the border.

But now, for three days starting Monday, no beating retreat ceremony will be held at the Wagah border at the request of Pakistan, said BSF chief DK Pathak.