4 Dead In Serial Blasts At Thai Resorts, Many Tourists Injured 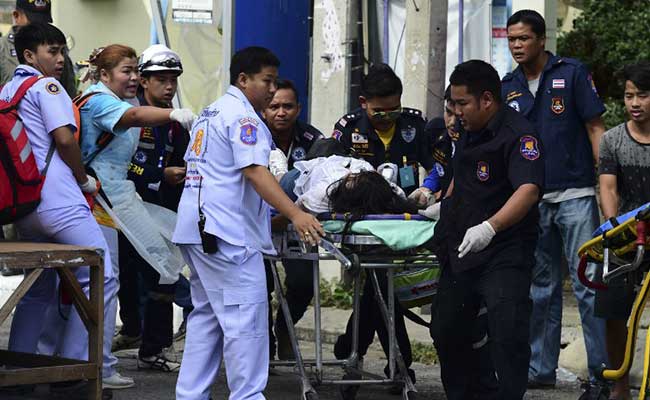 Thai rescue workers attend to an injured victim after a bomb exploded in Hua Hin. (AFP)

Bangkok, Thailand: A string of bomb attacks hit popular tourist towns across Thailand, leaving four dead and many injured, with authorities on Friday ruling out terrorism despite suspicions that insurgents in the kingdom's deep south are responsible.

In the normally peaceful resort town of Hua Hin, blood-spattered tourists were given first aid by rescue workers as forensics teams picked through the rubble, with police in Bangkok scrambling to reassure visitors the situation was under control.

"This is not a terrorist attack. It is just local sabotage that is restricted to limited areas and provinces," national police deputy spokesman Piyapan Pingmuang told reporters in Bangkok.

Analysts said Muslim insurgent groups in the south could be behind the attack, but warned that coordinated bombings targeting tourists would mark an unprecedented escalation in a simmering conflict largely contained in the border region.

Twin bombs exploded in the upscale resort of Hua Hin late Thursday, killing one woman and wounding more than 20 others, including nine foreign tourists.

They were followed by two more explosions on Friday morning that killed another person and left injured and bleeding people lying on pavements as emergency workers rushed to the scene.

A further two blasts struck Friday at Patong Beach on the popular tourist island of Phuket while three more were reported further south -- two in the southern town of Surat Thani, killing one, and one more blast in Trang, which also left one person dead.

"The bombs are an attempt to create chaos and confusion," Prime Minister Prayut Chan-O-Cha told reporters as he called for calm.

Small bombings are common in the kingdom during periods of heightened political tension but there have been few such incidents in the past year and it is rare for tourists to be targeted.

Britain and Australia reacted by advising their nationals to avoid public places.

Hua Hin is home to the summer palace of Thailand's revered royal family, and the firsts blasts came on the eve of Queen Sirikit's 84th birthday.

"It was very shocking. There was a loud noise and police were running everywhere, it was terrible," said Michael Edwards, an Australian tourist staying in a guest house close to where one of bombs detonated.

"I was just surprised that it happened here... now I'm thinking if it's worth staying," he told AFP.

The first two bombs that went off in Hua Hin on Thursday were hidden in potted plants and exploded within 30 minutes of each other in the bar district of the popular beach town.

Hua Hin, which lies about 200 kilometres (125 miles) south of Bangkok, is popular with both local and foreign tourists and has for years been favoured as a retreat by King Bhumibol Adulyadej, the world's longest reigning monarch.

The 88-year-old is currently hospitalised in Bangkok for a number of health issues, a source of anxiety for many Thais and a key factor in the kingdom's past decade of political turmoil.

Due to the city's royal connections, "the attack on Hua Hin seems like a direct affront at the Kingdom of Thailand", said Paul Chambers, an expert on the Thai military.

He added that "the culprits are most likely Malay-Muslim insurgent groups fighting the Thai state in the deep south".

Zachary Abuza, an expert on Southeast Asian militant groups, said that while the southern insurgents had not carried out coordinated attacks for years, it was possible "a small cell" was behind this assault.

"Whoever has perpetrated these wants to do serious damage to the Thai economy. That is where the junta is the most vulnerable."

Thailand's ultra-royalist military rulers, who seized power in 2014 after a decade of at times violent political unrest, have touted an increase in stability in the kingdom as a major accomplishment of their rule.

The junta on Sunday saw its new version of the constitution approved in a referendum, although the three insurgency-hit provinces rejected the controversial statute.

Thailand's reputation as the "Land of Smiles" has suffered in recent years from political unrest and a number of high-profile crimes against foreigners.

But tourists continue to flock to its white, sandy beaches. The kingdom is expecting a record 32 million visitors in 2016 -- a bright spot in an otherwise lacklustre economy.

The latest blasts came just days before the first anniversary of the last major attack on tourists in Thailand -- an August 17 bomb that killed 20 people, mostly ethnic Chinese tourists at a crowded Hindu shrine in Bangkok.

Two Uighur men from western China have been accused of the attack and are due to go on trial this month. Both have denied any involvement.