One Killed, 30 Injured As Train, Truck Collide Near Japan's Tokyo

The accident derailed the front carriage of the train and badly damaged the truck, which burst into flames and spewed its cargo of hundreds of oranges and lemons alongside the tracks. 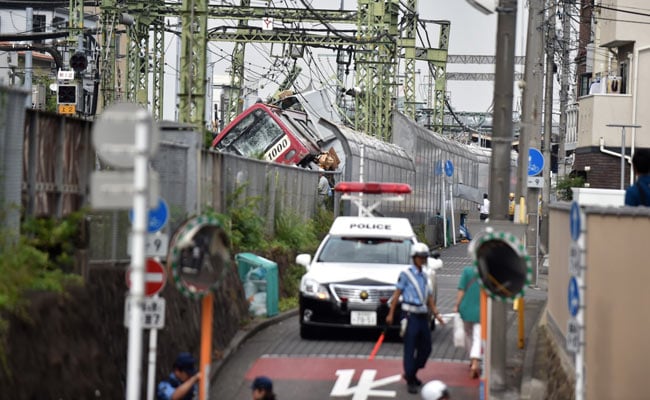 The accident took place before noon as the train, carrying 500 people, hurtled through the crossing.

One person was killed and around 30 people injured on Thursday, authorities said, when an express train and a truck collided on a busy line connecting Tokyo and Yokohama.

The accident derailed the front carriage of the train and badly damaged the truck, which burst into flames and spewed its cargo of hundreds of oranges and lemons alongside the tracks.

The train's front window was completely smashed and the truck appeared to be pinned to a wall just beyond the crossing where the collision took place.

"Emergency crews took 30 injured people into care. Of those, two had sustained serious injuries. Of those severely injured, the hospital has confirmed the death of one person," a fire department official told reporters at the scene.

According to the Keikyu train company operating the service, the driver said he had applied the emergency brake but too late to prevent the collision.

The company said it had launched an investigation into the accident that took place just before noon as the express train, carrying 500 people, hurtled through the crossing.

"The maximum speed there is set at 120km (75 miles) per hour and we believe the train was travelling as fast as that," a Keikyu spokesman, who declined to be named, told AFP.

"There is an abnormality detection system there for emergencies and cases such as a truck getting stuck on the crossing. This system kicked in and an alarm signal was flickering," added this spokesman.

Eyewitnesses spoke of a fierce fire and panic, with TV images showing terrified passengers streaming from the carriages after the collision.

One man who was travelling in the first carriage told national broadcaster NHK there was a "sudden sound" and that the impact left people in heaps.

"I saw flames. Then the fire became more and more intense. So everyone rushed to get outside. It was a panic," this eyewitness said.

Another person who witnessed the scene said there were flames coming from the bottom of the truck and that the "smoke was awful."

Japanese trains have a well-deserved reputation for safety and punctuality and accidents are rare.

Earlier this year, 14 people suffered light injuries when a driverless train in suburban Tokyo went the wrong way and smashed into the buffers.

In April 2005, a speeding commuter train near Osaka jumped the tracks on a tight bend during the morning rush hour and smashed into an apartment tower. The driver and 106 passengers were killed and more than 550 people were injured.

The crash was Japan's worst rail disaster since 1963 when 161 people died in Yokohama after a freight train collided with a truck and was then hit by two passenger trains.

Japan's deadliest-ever train accident was in February 1947 when a passenger train derailed near Tokyo, killing 184 people and injuring nearly 500.

(Except for the headline, this story has not been edited by NDTV staff and is published from a syndicated feed.)
Comments
JapanTokyo