One suicide bomber detonated his explosives near a police truck in Quetta, Pakistan (AFP)

"It is a suicide attack, and we have a confirmation that six of our police officials are dead," Ansari told Reuters.

Half an hour earlier, two suicide bombers tried to attack a paramilitary checkpoint on the city's outskirts, but troops deployed there engaged them, a paramilitary officer said.

He said the troops had opened fire at the attackers, who detonated their explosives, wounding eight soldiers. Both the suicide bombers died, he said on condition of anonymity because the army was due to issue an official statement. 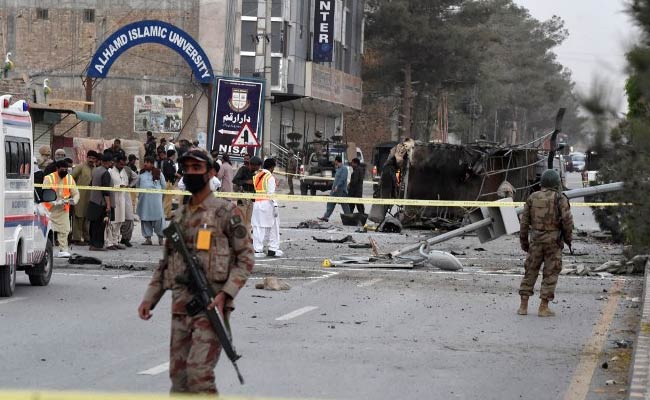 No one immediately claimed responsibility for the attacks.

Quetta is the capital city of the southwestern province of Baluchistan, which has been plagued by violence.

Terrorists linked to the Taliban, al Qaeda and ISIS have been operating in the province, which borders Iran as well as Afghanistan. It also has an indigenous ethnic Baloch insurgency fighting the central government.

ISIS has created a branch in Pakistan and Afghanistan, mostly by recruiting among break away factions of other established terrorist groups. Its followers have claimed some of Pakistan's most deadly recent attacks.

Six members of Pakistan's tiny Christian minority community, four of them from the same family, and two people from the Shi'ite Muslim minority were gunned down in Quetta this month.

Promoted
Listen to the latest songs, only on JioSaavn.com
In December two suicide bombers stormed a packed church in southwestern Pakistan, killing at least 10 people and wounding up to 56.

Pakistan, a nuclear armed nation of 208 million people, has for some time seen a decrease in terrorist violence, but the terrorists, who want to install their own harsh brand of Islamic law, remain potent.
© Thomson Reuters 2018