3 Students Killed In Lab Explosion At University In China

The explosion happened during a scientific research experiment at the Beijing Jiaotong University. 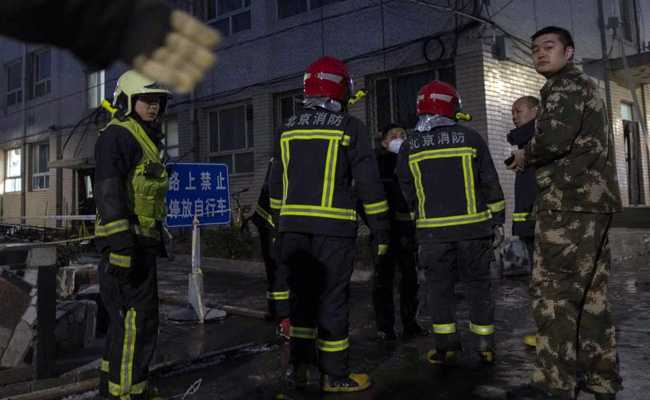 Some 30 fire engines were sent to the scene and it took nearly an hour to contain the fire.

Three students were killed in a laboratory blast at a Beijing university on Wednesday, the city's fire department said, in an accident that blew out windows and left the building a blackened shell.

"There was an explosion at the experimental site during a scientific research experiment" on wastewater treatment in the Environmental Engineering Laboratory, the Beijing Fire Department said.

"The accident caused the death of three students," it added in a statement posted on its social media account.

The incident happened just after 9:30am (0130 GMT) at the Beijing Jiaotong University in the western part of the city.

Some 30 fire engines were sent to the scene, and it took nearly an hour to get the blaze under control. Local authorities have launched an investigation into the cause of the incident.

A video posted by the state-run People's Daily newspaper showed blown-out windows and blackened buildings around a courtyard, with trees and ground covered in firefighting foam.

Images on social media showed plumes of dark smoke billowing from low-rise buildings as firefighters fought to contain the blaze.

Students could be seen wearing face masks and complaining of an acrid smell.

Industrial accidents are common in China, where safety regulations are often poorly enforced.

Last month, a gas leak caused the explosion of a truck carrying combustible chemicals near the entrance of a chemical factory in the northern Chinese of Zhangjiakou, killing 23 and injuring 22 others.

In July, a blast at a chemical plant in southwest Sichuan province left 19 dead and 12 injured. The company had undertaken illegal construction that had not passed safety checks, according to local authorities.

But one of the nation's worst accidents happened in 2015, when giant chemical blasts in a container storage facility killed at least 165 people in the northern port city of Tianjin.

It caused more than $1 billion in damage and sparked widespread anger at a perceived lack of transparency over the accident's causes and its environmental impact.

A government inquiry eventually recommended 123 people be punished. Tianjin's mayor at the time of the accident was sentenced to 12 years in prison for graft in September.